They finished the Frankfurt marathon in Germany in a combined time of 4:59.22. 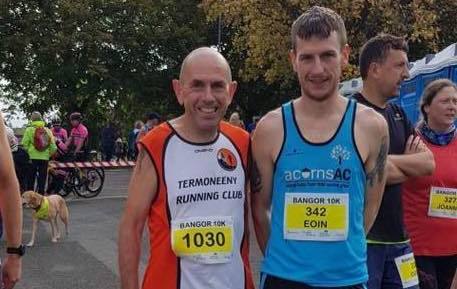 Tommy (59) and Eoin (34) Hughes, from Maghera, in County Derry, have broken the Father / Son Guinness World Record time for running a marathon.

Tommy, who runs with Termoneeny Running Club and Eoin, who runs with Acorns AC finished the Frankfurt marathon in Germany in a combined time of 4:59.22. They beat the previous record time of 5:02.11. Eoin finished in a time of 2:31.30, while Tommy finished in 2:27.52.

The father in the duo, Tommy, also beat a new Age World Record for 59-year-olds and beat his personal beast finishing the marathon in 2:27.52.

Read more: Fungie the dolphin is officially in the Guinness Book of World Records

Eoin told Runners World “It’s really a privilege to race with my dad.

“Not everyone has that opportunity, so I try to enjoy every opportunity. We don’t really get competitive against each other; we just try to do our best in each race that we do.”

Eoin Hughes @acornsAC updates us on how training is going as he takes on a #GuinnessWorldRecord Challenge with his father Tommy @termoneenyrc at this year’s Half Marathon!⬇️https://t.co/T1kKJYAORq

🤩 Come out and support Tommy & Eoin this September for a day to remember! pic.twitter.com/PhCHFl6DrE

However, it's worth noting that Tommy, who turns 60 next year, is no normal runner. He began his running career at the age of 21 when he represented Ireland at the Barcelona Olympics in 1992. In the same year, he set his marathon personal best of 2:13:59, at the Marrakesh Marathon in Morocco.

These days Tommy and Eoin both train in Maghera, a small town in Derry.

“For the 12 weeks leading up to the Frankfurt Marathon, I averaged 120 miles per week. My mileage when I was younger would have been very similar to what it is today.”

Eoin only began his own running career four years ago to get back in shape. Once he became involved in races and he increased his training intensity, Eoin realized how hard his Dad worked.

"Although [my Dad] might not have been my inspiration to start running, since I have been running, his training and the times he’s running at his age are truly an inspiration."