Could Irish housing be at risk of a fire like Grenfell Tower?

An expert was warned that a similar tragedy could well happen in Ireland. 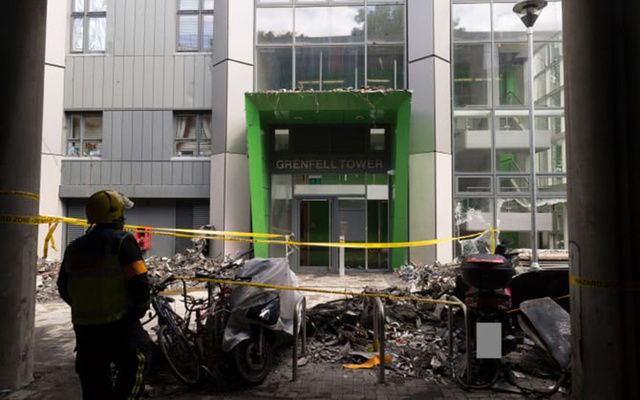 The ruins of Grenfell Tower. RollingNews.ie

Concern has been raised that a similar tragedy to Grenfell Tower could happen in Ireland.

Chartered surveyor Kevin Hollingsworth told RTÉ radio he was deeply worried that a similar system, where individual landlords are responsible for fire safety in a building, had been put in place in Ireland in 1993.

"It is a wrong path. All sub-standard buildings we have in Ireland, it is only a matter of time before they come out," he told RTÉ’s “Morning Ireland”.

He added that his concern for fire safety had been roused after visiting several high-rise apartment blocks in Dublin.

"The issues found are common in all of those 29 developments … non compliance with fire safety, breaches in compartition of common areas, and there is widespread non-compliance with the approved fire safety certs.

"When we took off the socket in one apartment, I could have pushed the socket into the adjoining property. Between apartments there is meant to be enough layers of plasterboard to provide for one-hour fire resistance."

Houses are usually at a marginally lower risk of fire because electrics are rarely shared between two units.

Since the fire, newly-appointed Housing Minister Eoghan Murphy has ordered all high rise building review their fire safety standards to ensure they remain at an acceptable level.

In 2013, residents of a Dublin apartment bloc were told their homes were a fire risk and owners were warned they could face a bill of between $10 and $20,000 each for repairs.

Very clear explanation of fire issues & repairs needed in Longboat Quay, Dublin, given by Kevin Hollingsworth on @rtenews at 6 #longboatquay

"Fire Services can issue a closure notice, emergency works may have to be done to prevent evacuation" Kevin Hollingsworth @TonightWithVinB

At the time, then-Taoiseach Enda Kenny said a rush to cut corners was a feature of many properties built during the Celtic Tiger but added he did not intend to rush to judgement on the situation.

Roughly 900 people were living in 300 apartments but ultimately were not asked for a penny when the city council and developers agreed to stump up the funds last December.