An Irish doctor has warned that up to 20,000 people in Ireland could become infected with coronavirus within weeks. 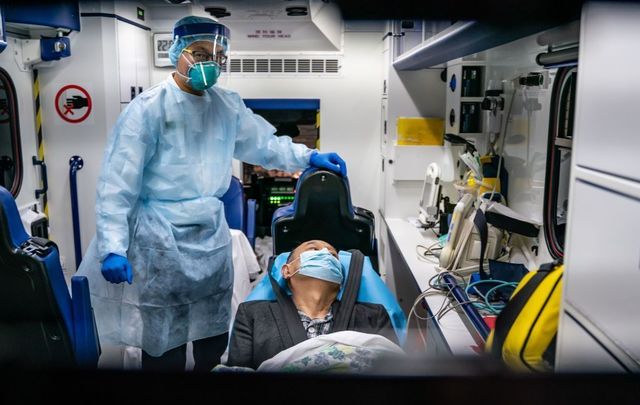 A doctor treats a patient for Coronavirus Getty

An Irish doctor has warned that up to 20,000 people in Ireland could become infected with coronavirus as the World Health Organization says the world needs to be on alert.

Professor Sam McConkey from Beaumont Hospital said on RTÉ's Morning Ireland that the virus is "likely" to spread around the world.

The deadly virus, which originated in Wuhan, China, has already killed over 170 patients and infected more than 7,000 people.

While the virus has yet to reach Ireland, McConkey predicted that thousands of people could show symptoms of it over the next eight weeks.

"It hasn't yet been detected in Ireland but it is quite possible that over the next three, four, six, eight weeks that we might be seeing thousands of people coming to emergency rooms with that virus.

"From the data in China, about 2 percent may die, about 25 percent of those people will need oxygen and hospital care to stay alive.

McConkey, who expects the virus to spread widely around the world, noted that planning and "strengthening our diagnostic capacity" and teaching hospital staff about personal protective equipment are critical.

Speaking about Ireland's capacity to deal with coronavirus, McConkey said: "We're a very, very wealthy country. To put this in context the Chinese have just given €8 billion to build two big hospitals in Wuhan to deal with isolated cases - that's four children's hospitals they're proposing to build in two weeks and they probably will.

"We could do that if we needed to, we have the technical ability to respond to this if it becomes an issue of existential survival of 20,000 people in Ireland potentially.

"So I think we're well organized, we've good technology, good diagnostics, very well-trained staff so I think we could survive it."

Dr. Michael Ryan, executive director at the World Health Organization health emergency program, said that the virus is being treated as a global epidemic.

Tanáiste (Deputy Prime Minister) Simon Coveney said that several Irish people living in infected regions in China are set to be flown out of the country and placed in quarantine for two weeks. If symptoms don't appear after two weeks, then they are clear of the virus.

“We have a small number of Irish citizens who are in the province that is affected in China," Coveney said.

“We have been in contact with them through our embassy. Some are happy to stay and a very small number want to leave. We are putting arrangements in place to facilitate that and that is likely to happen in the next couple of days.”