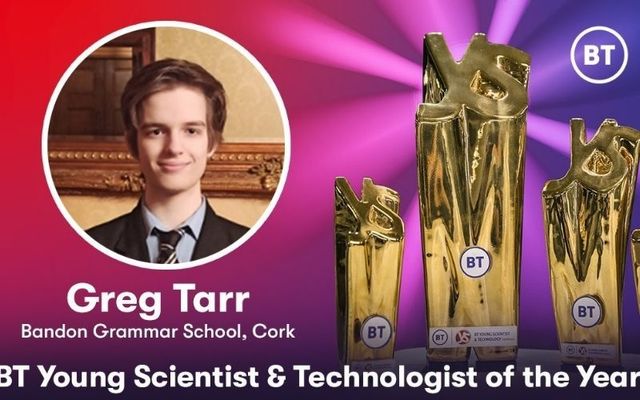 A  17-year-old Cork student has been named the winner of the 57th BT Young Scientist and Technology Exhibition (BTYSTE).

Deepfakes are videos and images which are often used to spread misinformation by altering a person's face or body so that they appear to be someone else.

Gregory Tarr's project used artificial intelligence to detect deepfake media with unprecedented accuracy. His software is over 150,000 lines of code and made significant improvements on the current best model available in terms of both speed and efficiency.

The Journal reports that Tarr made these improvements without compromising the software's ability to detect deepfakes and that his project could be used to make the internet a safer place.

The young student now receives a check worth €7,500 and the newly-designed perpetual trophy for his efforts and will also represent Ireland at the European Union Contest for Young Scientists later this year.

Gregory Tarr, Bandon Grammar School, Co Cork. For his project ‘Detecting state of the art deepfakes’
Stand 4308 on our virtual portal.
Well done, and thank you, everyone for embracing a digital-first exhibition due to Covid-19#BTYSTE #beyondlimits pic.twitter.com/9UgNnV5GFH

Trinity College's Leonard Hobbs, who chaired the judging panel for the technology category at the BTYSTE, said that Tarr had shown expertise in computer technology that belied his young age.

"The winner this year demonstrated an expertise in computer science which was well beyond his years," Hobbs said at a virtual ceremony on Friday.

"The level of coding he deployed in developing the extremely complex program which detects fake videos, was guided by his deep understanding of the state-of-the-art of this leading-edge technology.

"The judges have been continually impressed by Gregory’s projects at the BT Young Scientist competition over the past few years and they were delighted that he had progressed to winning the top award this year."

A total of 550 projects were then shortlisted by a judging panel to take part in the finals, with the winners announced on Friday at a virtual ceremony from Dublin's Mansion House.

The number of entries for this year's competition was down compared to previous years due to the closures of schools at the end of the academic year last year; a time when many students choose their project topic for the exhibition. However, Mari Cahalane, the head organizer of the event, said that the standard was as high as ever.

Other winners at this year's Young Scientist Exhibition included Abby Mullins, Chloe Murphy and Megan Carroll from Moate Community School in Co Westmeath, who scooped the top prize in the group category for their project "Wool-Savior of Our Sea".

The three students developed a project that examined using a wool blanket to clean up oil slicks in the ocean and initially entered in the Biological and Ecological category.

They received a sum of €2,400 for their winning project.

A total of 36 individual awards and 36 group awards were handed out at the virtual ceremony at the Mansion House on Friday.