Three-year-old Omar was found stabbed to death in Dublin on Monday, now a policeman has made this extraordinary claim in court. 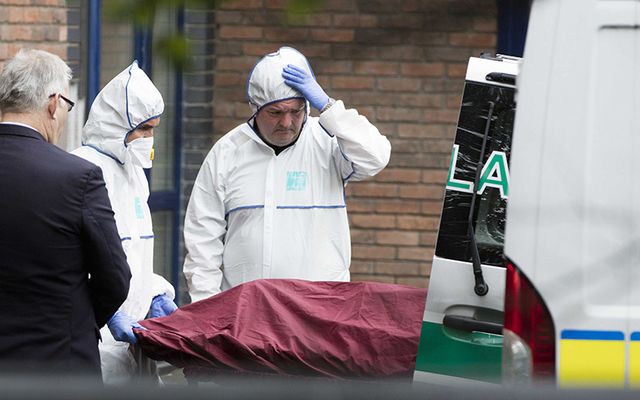 Disbelief at the crime scene where three-year-old Omar Omran was found stabbed to death. RollingNews.ie

A cop has told a court that a mother charged with knifing her three-year-old child to death confessed and blamed “the power” for her actions.

Omar Omran was found on Monday night by emergency services with stab wounds to his abdomen, chest, and legs.

His mother, Dr. Maha Al Adheem, had called an ambulance for help but when paramedics arrived at the scene they found the door locked and had to call local law enforcement for help to break it down.

Omar was pronounced dead at the scene and Al-Adheem was taken the to hospital and given treatment for what were described as “minor stab wounds”.

Since then she’s been arrested by gardaí (Irish police) and charged with Omar’s murder.

Yesterday gardaí issued a statement that “A woman in her early 40s who was arrested in relation to the homicide of an infant child that occurred on Monday evening 10th July, 2017 will appear before Criminal Courts of Justice, Court Number 3, this morning July 13, at 10.30am.”

This morning she appeared in Dublin District Court and Sgt. Brendan O’Halloran testified she had told him, “Yes, it was my knife. Yes it was my hand. It was not me. It was the power.”

No application for bail was made - in murder cases only the Irish High Court can grant bail - and Judge Michael Walsh remanded her in custody until July 20th.

Al Adheem moved to Ireland from Iraq seven years ago to work as a doctor and it was in Dublin that her son, Omar, spent all of his short life.

She is separated from her husband, Khalid Omran, who is believed to have not seen his son in a year and has been living in northern Iraq.

On Tuesday he arrived in Dublin and has since identified his son’s remains.

Speaking to the Star he said, “my heart is gone”.

“Three years old, he didn’t do anything to anyone. What of that? I have no life now,” he added.