Controversial War of Independence memorial to be removed from Glasnevin

The memorial wall provoked controversy because it remembered British soldiers and RIC officers who perished during the War of Independence in addition to Irish civilians and IRA volunteers. 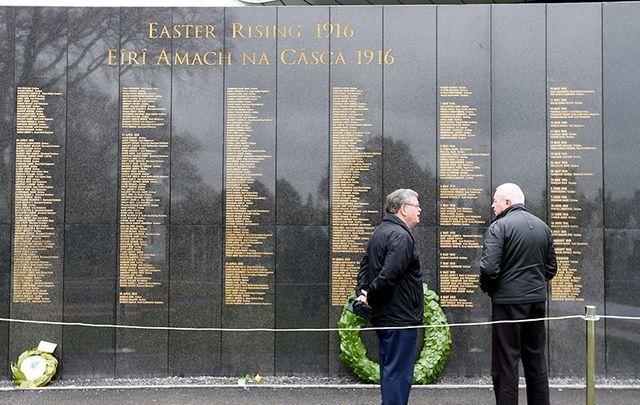 The Necrology Wall, was unveiled as part of the 1916 centenary commemoration. Rolling News

Glasnevin Cemetery has "discontinued" a memorial wall that controversially remembered British soldiers and RIC officers who died during the 1916 Rising and the Irish War of Independence in addition to Irish civilians and IRA volunteers.

The Dublin Cemeteries Trust said in a statement that it decided to discontinue the wall after it was severely vandalized for the third time.

"It is the firm view of Dublin Cemeteries Trust that if the wall were to be repaired for a third time it would be vandalized again," the trust said in a statement.

"Dublin Cemeteries Trust is not in a position to cover the costs of continually repairing the wall or in the position to provide the security that would be necessary."

The trust said that it made the decision "with great regret".

Glasnevin Cemetery's Necrology Wall was intended to include the name of every person that died in the Easter Rising, the Irish War of Independence, and the Civil War.

However, the inclusion of the names of Black and Tans and other British security forces provoked widespread controversy and anger.

Independent councilor Nial Ring said that the decision to discontinue the memorial wall was a "triumph of common sense and for respect for the people who fought and died for Ireland".

However, RTÉ broadcaster Joe Duffy said that he intends to protest against the decision.

"I am deeply saddened and shocked that vandalism and thuggery has triumphed in removing the only memorial in the world that names the children and civilian men and woman killed that week," said Duffy, who released a book in 2015 dedicated to the 40 children who perished during the 1916 Rising.

"Surely our mature country can remember all those who died - most of them Irish - regardless of the uniform they wore," he added.

Tanáiste Leo Varadkar described the vandalism of the wall as a "huge setback for reconciliation".

"Those who repeatedly vandalized the wall were driven by feelings of hatred, narrow nationalism and anger," Varadkar said on Twitter.

"We’re better than this as a nation. These are not our values. We need to be willing to reach out to the 1 million people on our island who identify as British or British and Irish."

The Dublin Cemeteries Trust said the black granite memorial wall will remain in Glasnevin, but the names already inscribed on the wall will be replaced by black panels.

The trust is considering a standalone monument to remember all casualties between 1916 and 1923.