It appears the Taoiseach was unaware he was going to be marching alongside McGregor, who was arrested and charged with robbery in Miami earlier this month. 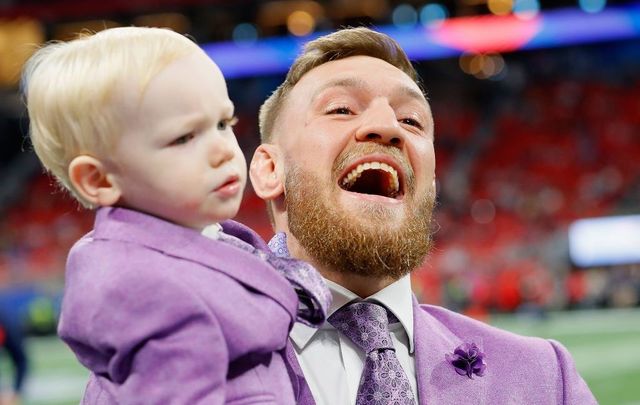 Conor McGregor with his son, Conor Jack McGregor Jr., on the field prior to Super Bowl LIII at Mercedes-Benz Stadium on February 3, 2019, in Atlanta, Georgia. Kevin C. Cox/Getty Images)

Despite his arrest earlier this week, Conor McGregor took a prime spot at the St Patrick's Day Parade in Chicago.

Irish leader Leo Varadkar was joined at the Chicago St Patrick's Day Parade today by Conor McGregor, despite the MMA fighter having been arrested and charged with robbery in Miami this week.

Taoiseach (Prime Minister) Varadkar told The Irish Times that he had been unaware that he would be sharing his prime spot at the festivities with the international sports star saying, “I imagine the parade organisers invited him.”

He added that they did not speak to each other despite their proximity throughout the parade.  The pair walked on either side of Chicago Mayor Rahm Emmanuel, with McGregor sported a green sash with his name printed on it.

and #ConorMcGregor has also arrived at the #Chicago #StPatricksDay parade... pic.twitter.com/XiYejEJ1lJ

“I think that is up to the organisers of the parade to decide who they want to march in the parade, I don’t think he was representing the country, that’s kind of what I was doing," Varadkar added.

Controversial Irishman McGregor was arrested and charged with robbery in Florida this week after allegedly grabbing and stamping on a fan's phone. He made no comment after the arrest other than to say "I love Ireland."

Read more: McGregor is out of control as reality bites for “Notorious” fans

This was the second time the Dublin native had found himself on the wrong side of the law in the US, striking a plea deal with prosecutors in New York in 2018 following a violent incident in Brooklyn.

The comments from Varadkar may show the extent of the fall from grace of McGregor in recent months. Just this time last year as the Taoiseach made his first St Patrick's Day trip to the US, he joked that McGregor could carve himself a career in politics, saying “anything is possible.”

While in Chicago, McGregor paid tribute to the plumbers, riding in the car of their union in the parade. He worked as a plumber before he reached international sports stardom. He was also eager to show off his green slippers!

Do you think McGregor should have been invited to Chicago? Does he represent Ireland? Let us know your thoughts in the comments section, below.