Conor McGregor quizzed by police over alleged assault in Dublin

The Irish sports star was questioned by police in Ireland just 24 hours after he was cleared of a robbery charge in Florida. 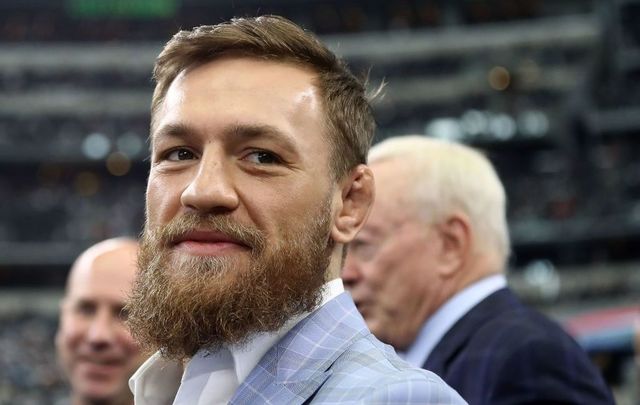 Conor McGregor is seen on the sidelines before the NFL game between the Jacksonville Jaguars and Dallas Cowboys at AT&T Stadium on October 14, 2018, in Arlington, Texas. Ronald Martinez/Getty Images

International Irish sports star Conor McGregor is alleged to have punched a man on April 6. The claims are being investigated by Gardaí.

MMA star Conor McGregor presented himself for questioning Tuesday at a Garda (police) station in south Dublin after a man claimed that the sports star punched him.

"The version of events given by the alleged victim is that words were exchanged between both men. It escalated and a single punch is alleged to have been thrown," a source told the Evening Herald.

McGregor met officers by appointment at the Sundrive Road Garda Station on Tuesday along with a legal representative, claims the Irish Independent. The alleged victim, a man in his 30s, claims the Dublin-born UFC champion punched him in the Marble Arch pub in Drimnagh on April 6 after a verbal row escalated.

"Gardaí are following a definite line of enquiry in the case," a Garda spokesperson told the Irish Mirror.

"One man presented himself at a Dublin Garda Station earlier this week and was questioned by Gardaí in relation to the incident.

"No arrests have been made to date and enquiries are ongoing.

"Gardaí are investigating an incident at a pub in Drimnagh on the 6th April 2019."

Read more: McGregor is out of control as reality bites for “Notorious” fans

The Garda interview came just 24 hours after McGregor was cleared of robbery charges in Florida. The Dubliner stood accused of sudden-snatching and criminal mischief over an incident with a fan in Miami but the charges were dramatically dropped as the victim revealed he no longer wanted to appear in court.

"Mr. Abdirzak has had some time to reflect on his encounter with Mr. McGregor," a memorandum from the prosecutor stated.

"He no longer believes Mr. McGregor sought to injure or damage him or his property or permanently or temporarily deprive him of his property.

"The victim of the crime does not wish to return to the United States and prosecute this case."

CCTV of the Dublin incident is now being reviewed by Gardaí and a file is being prepared for the Director of Public Prosecutions who will decide if charges should be brought against McGregor.