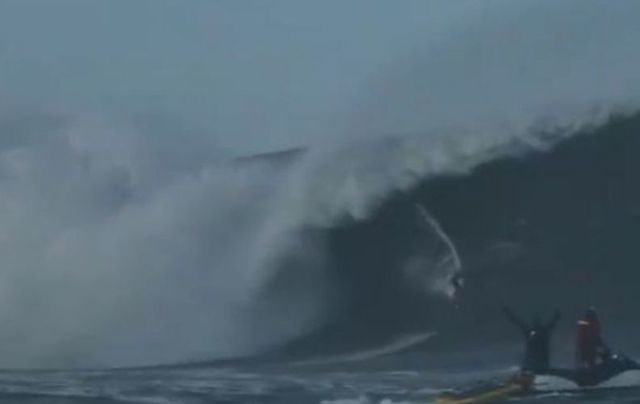 The wave scaled by Conor Maguire off the coast of Sligo is believed to be the biggest wave ever surfed in Ireland. RED BULL IRELAND TWITTER/CLEM MCINERNEY

Irish surfer Conor Maguire has been nominated for "Ride of the Year" after surfing a 60-foot wave off the coast of Sligo at the end of last year.

Maguire has been nominated in three out of four categories at the annual Global Red Bull Big Wave Awards after he surfed a 60-foot wave at Mullaghmore Head last October.

The wave is believed to be the biggest wave ever surfed in Irish waters.

Maguire has received nominations in the "Ride of the Year", "Biggest Tow", and "Performer of the Year" categories at the annual awards in recognition of his accomplishment.

The Irish surfer is the only European male to be nominated in three separate categories.

Maguire described the nominations as the biggest moment of his surfing career to date.

"This is, without doubt, the biggest moment of my surfing career to date and one I won’t forget," Maguire said.

"I have an incredibly supportive network and team around me, and without them, I wouldn’t be able to do what I love at this level, so I am really happy to see our hard work recognized on a global scale like this," he continued.

A total of $350,000 in prize money will be awarded across four categories in men's and women's divisions.

The categories include the three categories that Maguire was nominated for in addition to "Biggest Paddle".

Photographers and videographers will also take home prize money at the Red Bull Big Wave Awards Show on October 29, which will be broadcast live on Red Bull TV.