Dublin-born Ibrahim Halawa was just 17 years old when Egyptian authorities arrested him during a peaceful protest in Cairo four years ago. 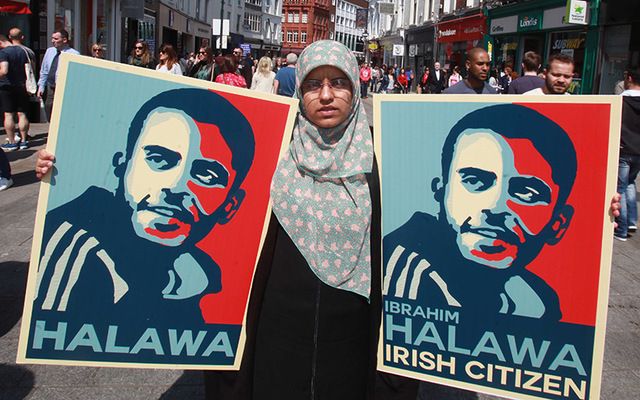 The Irish government plan to send an independent medical expert to examine the physical state of Ibrahim Halawa, a Dublin-born man who has spent over 1,300 days in an Egyptian prison. Minister for Foreign Affairs Charlie Flanagan has also encouraged Halawa to put an end to his hunger strike amid concerns for his health.

Halawa was just 17 years old when Egyptian authorities arrested him during a peaceful protest in Cairo four years ago but under Egyptian law, he might as well have been 77. Three-year-olds have stood trial in Egypt.

Yes, read that line again. One three-year-old was sentenced to life in prison in the aftermath of the Arab Spring. Thankfully, someone with sense suspended the sentence but presumably, it will hang over the head of that child until his dotage.

At the rate things are proceeding, Ibrahim Halawa might want to start thinking of retirement plans once he escapes the clutches of the law in a country whose judicial structure includes an entity called the “Court for Urgent Matters.”

Halawa’s case evidently doesn’t rate at such an august level as his day in court has been adjourned twenty times.

Arrested at a protest in August 2013, Halawa’s case is wrapped up in a batch of 400 others arrested during that protest and also awaiting their day in court.  While his next hearing date is April 5, nobody is betting on an actual result that day.

The Halawa case has garnered a fair bit of attention in Ireland and Britain and the Irish government has been monitoring the case and pleading with Egyptian authorities to, well, get on with it. Irish Minister for Foreign Affairs, Charlie Flanagan, has said he was "disappointed and frustrated" by the delay.

"Ibrahim has now spent more than 1,300 days and nights in an Egyptian prison cell without having been convicted of any crime. This is a source of great concern to the Irish government," said Flanagan.

The Irish government is now planning to send an independent medical expert to examine Mr. Halawa. He has been on hunger strike and is reportedly now using a wheelchair.

During the most recent court hearing, Ireland’s Ambassador in Cairo, Damien Cole, and a team from the Irish embassy were on hand to observe the proceedings, as they have been at all of the hearings in the trial to date.

Pic taken of Ibrahim in the previous prison at entrance. He looks at his picture and imagines that this could have been his graduation picture. Image: RollingNews.ie

According to a Department of Foreign Affairs release, there were a number of witnesses called and cross-examined at the hearing, and petitions from defense lawyers were considered. The presiding judge then adjourned the case for a further hearing on April 5.

The panel of judges also ordered that further medical examinations should be undertaken in respect of Ibrahim Halawa.

Said Minister Flanagan: “The lack of clarity around Ibrahim’s health continues to be a serious source of concern.

“Following a government review of the case, officials are engaging with the Egyptian authorities to seek urgent clarification of our citizen’s medical condition and to secure assurances in relation to his access to appropriate treatment.

“The Egyptian authorities have a clear responsibility to ensure Ibrahim Halawa’s welfare, and I and my department have consistently underlined this in all contacts with Egyptian interlocutors.

“Indeed, I raised these issues again in my most recent face-to-face meeting with Egyptian Foreign Minister Sameh Shoukry when I met him earlier this month.

“I am, at the same time, concerned at persistent reports that Ibrahim is on hunger strike.

“I urge him in the strongest possible terms not to pursue such a course of action, and to protect his health in every possible way.

“I also urge all parties who are in contact with him or who have influence with him to dissuade him from any actions that would be detrimental to his health."

And there the case rests. And rests.