Co-Operation Ireland’s Peter Sheridan on building peace in Ireland since the Troubles, what Brexit means for their continued work, and where the island of Ireland goes from here. 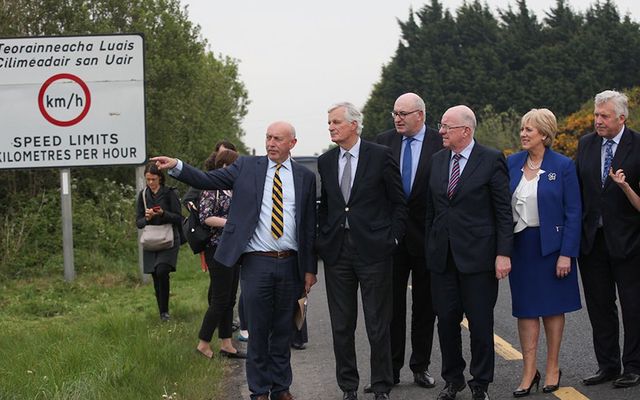 In 1979, when the Good Friday Agreement wasn’t even a glimmer in the eye of Northern Ireland, a charity with the mission of building peace in Northern Ireland was formed. Co-Operation Ireland, then called Co-Operation North, sought to do this by improving relationships across the border between Northern Ireland and the Republic of Ireland. Their work has continued through the Troubles, the Peace Process, and the Good Friday Agreement, and has brought about historic moments such as the handshake between Queen Elizabeth and Northern Ireland’s late Deputy First Minister Martin McGuinness. Their work continues today with renewed vigor as Brexit conditions stand to shake up the hard-won progress.

IrishCentral talked with Peter Sheridan, Co-operation Ireland’s Chief Executive of nearly 10 years, about how far they have come, and where the island of Ireland - and Irish America, too - can help things go from here.

Next year, you will have been with Co-operation Ireland for 10 years. How has it grown and changed in this time? What drew you to begin this work back in 2008?

In 2008 I had just completed 32 years as a police officer in Northern Ireland, all of it during the conflict. I was looking for a different career and whilst people might consider that peacebuilding and policing are very far apart actually, they are not. Good policing is about protecting a citizen’s rights; peace building is also about protecting people’s rights post conflict.  Of course, there are many differing aspects to the two roles but ultimately both roles are about making Northern Ireland a safer place for people to live and work in.

When I joined Co-operation Ireland it had come through the conflict and the establishment of the new power-sharing government post the Good Friday/Belfast Agreement (The Agreement).  During the conflict, Co-operation Ireland was clear what its role was not least because it could see what needed to be done from the violence/murder that was a daily diet on our television screens. But, post conflict when I joined we had to consider what our role was in the future.  For us, it had to be about reconciliation, we had to help find a way where people in Northern Ireland, on the island of Ireland and between Great Britain and Ireland could learn to live together like citizens and not enemies.

We were also very clear that whilst ‘The Agreement’ was about accepting how we were going to be governed and agreeing what the institutions of government were going to be, there remained many outstanding issues.  For example, 95% of our social housing remains segregated on religious grounds, only 6% of children go to Integrated schools, and since ‘The Agreement’ we had to from necessity build a considerable number of so called ‘peacewalls’ (physical barriers) between communities.  The legacy from the NI conflict was also contaminating our ability in to agree a future. In Co-operation Ireland, we needed to focus our efforts to ensure that we were not going to settle for some sort of communal division or separatism between the people of NI or across the island of Ireland.

What does Brexit and the uncertainty surrounding how it will play out mean for Co-operation Ireland's work?

Too often people saw the ‘conflict’ in Northern Ireland as one of Catholic versus Protestant, a religious conflict; however, this was not accurate.  The conflict was one about identity, where many in the Catholic/Nationalist/Republican community saw their allegiance to the Republic of Ireland and many in the Protestant/Loyalist community saw their allegiance to a UK government. Therefore, the border between Northern Ireland and the Republic of Ireland became the source of conflict.

The wider context of European integration took much of the heat out of the border issue and the Good Friday Agreement made it invisible. Under ‘The Agreement’ people in Northern Ireland could select to be British or Irish or both.  People could hold two passports. A physical border, whether that is a customs or immigration border, runs the risk of making the border visible again.  Co-operation Ireland has set several key priorities where we will focus our work on Brexit. These are:

Which of Co-operation Ireland's achievements or milestones make you the proudest?

Since it was founded in 1979 there have been many successes in Co-operation Ireland, from the many innovative cross border, cross community programs during the conflict to playing an important role in the arrangements for HM The Queen’s first visit to Ireland in 2011 and assisting in the reciprocal visit of the President of Ireland’s first ever official visit to the UK in 2013.  We are also very proud to have facilitated the historic handshake between HM The Queen and Martin McGuiness, who was then deputy First Minister of NI.

These seminal moments were an important part of the peace process and had lasting effects in building relationships across the island of Ireland and across the UK.  As part of the efforts to bring about the two historic visits Co-operation Ireland had in 1997 hosted HM The Queen and the then President of Ireland Mary McAleese at Crosby Hall, home of the Chairman of Co-operation Ireland Crosby in London.

What can the Irish in America do to help further peace on the island of Ireland? How does the work of Irish diplomats in the US play a hand in that?

Irish America played an immensely helpful role in supporting the Peace Process, whether that was through quiet diplomacy, or as acting as persuaders for a better future and encouraging our local politicians to take risks in the interests of peace, its influence was powerful.  Similarly, the efforts of Irish Ambassadors and Irish Consular Generals over the years in the US ensured that there was an accurate understanding of the issues challenging the peace process.  Because of the relationship they had built with the State Department and Irish America, they could when it was necessary call on that support to help move the process and our politicians beyond what seemed to be intractable problems.

These interventions were at times critical to achieving progress and without them it is unlikely The Agreement would have been reached.  Without the support of Irish America, organizations such as Co-operation Ireland would not have been able to engage in its important work, we are indebted to those individuals and companies who helped fund many of the cross community and cross border programs we were able to deliver through the years of the conflict.

What directions will Co-operation Ireland take in the coming years?

Looking to the future, Co-operation Ireland wants to ensure that we have a peaceful and stable island where people of all backgrounds live and work together for a better future.  We will be energized around Brexit so that the peace process is protected, and we will continue to develop initiatives which address the emerging challenges to peace. This will include facilitating understanding between communities, building positive relationships and co-operation across our islands and building a sense of interdependence.

In our Youth leadership programs, we will continue to seek out young leaders in marginalized communities to build and develop their skills so that they become leaders of a positive influence in their community.  Finally, having had the support of many people around the world Co-operation Ireland see an important part of its role is to share our learning and experience of peace building and practical co-operation internationally and particularly in other areas of conflict.

On Thursday, June 29, Co-Operation Ireland will host a farewell party to celebrate the extraordinary achievements of Consul General of Ireland, Barbara Jones, and show their appreciation for all of the support she has provided to Co-operation Ireland and other groups working toward peace and reconciliation during her assignment in New York. More information here.