Sláinte 2020's huge fundraising has been met with a concomitant demand for assistance as the harsh reality of hardship from the economic shutdown continues to escalate. 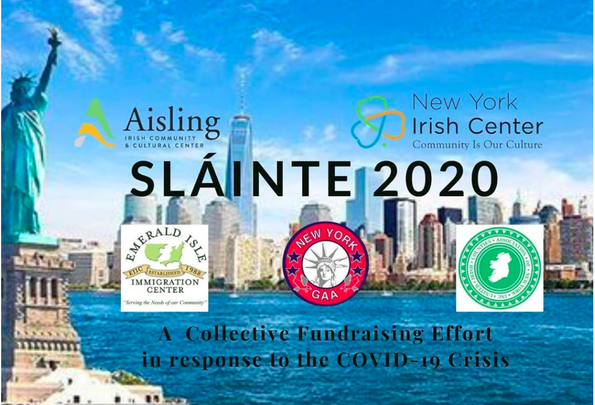 Though the epidemiologists positively proclaim that the curve is flattening as mortality rates and hospital admissions are declining, the harsh reality is that hardship from the economic shutdown continues to escalate.

It was against this unfolding crisis that Sláinte 2020 launched its fundraising website on April 16 to harness the collective reach of several well-known and long-standing Irish organizations to maximize fundraising to assist families and individuals who were adversely affected by the Covid-19 epidemic.  The partnership consists of the Aisling Irish Community Center, the New York GAA, the United Irish Counties Association, the New York Irish Center and the Emerald Isle Immigration Center.

When speaking during the week to Siobhan Dennehy, the executive director of the Emerald Isle Immigration Center, she strongly supported the collaborative efforts of the community-minded organizations.  “Our groups working together as part of Sláinte represents a unified collaboration for the community. In partnering, we can maximize our influence to accommodate more individuals who need our support during these trying and troubling times.”

Given that the Emerald Isle Immigration Center has two offices, in Woodside and Woodlawn, Dennehy would be at the coal-face of the social and economic problems that invaded Irish neighborhoods.  Queens, in particular, is close to the center of the pandemic, while the emigrant community has generally been hard hit.

Naturally, with the current concepts of social distancing and people density becoming paramount in our discourses, the usual methods of doing business are no longer acceptable.  I asked Dennehy how she and her staff were coping.  She stated that given that the shutdown edict was so abrupt, there was no time for retooling, reorganizing or a contingency plan to meet a radically changed work environment, where communication and contacts are essential elements in the delivery of critical and personal services.

Dennehy was quite emphatic about the flexibility and adaptability of her staff which hovers between 20 and 24, including full-time and part-time. “They pivoted quickly and adapted brilliantly to a surreal set of circumstances,” she said.

Further, she added that although the regular regimen has become more challenging, “there would be no diminution of standards or lessening of services” as the centers continue to expeditiously meet the varied needs of their clients.

Dennehy stated that though the offices may be closed, the volume of requests for information and assistance has increased substantially. Given the economic fallout from the shutdown, it’s hardly surprising that form-filling regarding unemployment, insurance, etc. has become a mundane but an arduous task where a simple snafu can derail the process.

Though the staff from the centers may be operating remotely, they are ready, able, and primed to deal with the latest surge of documentation that the crisis has spawned. Dennehy stressed that callers should expect a follow-up call or a response within 24 hours, despite the heavy volume of calls.

Meanwhile, the response to Sláinte 2020 has been very impressive.  The Irish and Irish American communities have always being in the vanguard when it comes to giving and looking out for the less fortunate.

While Sláinte has just been up and running over three weeks, approximately $170,000 has been raised to date. While the money may be flowing in, there is also a concomitant demand for assistance.

So far over $120,000 has been allocated, slated to help 160 individuals, with 35 of those being children. The money has been disbursed carefully and cautiously after the applications have been reviewed and vetted with absolute confidentiality guaranteed.

While the adage states that a good start is half the battle, well in this instance I fear though it’s a great start, it’s just the beginning of what may be a long and tough battle.  The volume of applications flooding in continues to grow with nearly 300 received, with an average of about 30 a day being the norm. It is projected that close to $1 million may be needed before any semblance of normalcy returns. Granted that there may be a glimmer of light at the end of a long tunnel as some relaxation of restrictions will allow pockets of construction to resume, it’s still a far cry from a full throttle building boom.  Construction in residential projects will certainly be off limits for a considerable time in the foreseeable future.

So far about two-thirds of applications have come from people in the hospitality sector, and given the nature of the industry, relative to social distancing and people density, this may be the last area of the economy to reopen and rebound. Sadly many of our people who were previously gainfully employed in this area will be confronted with a harsh reality and an uncertain future.

Dennehy, speaking on behalf of the Sláinte committee, stated, “We are extremely grateful to those who have donated thus far.  We are spreading the word far and wide and the response from the community has been overwhelming, with donations coming in from all over the tri-state area, and even overseas as well.”  And speaking of overseas, I just received an email from Martin McCartin, the treasurer of the Leitrim County Board, informing me that the Leitrim supporters, along with past and present players are participating in a 5k/10k walk/run/cycle in aid of Sláinte New York 2020 and Pieta House, on May 15.  It’s very gratifying to see a bit of reciprocation. Seamus and Caitriona Clarke, proprietors of JP Clarke’s on McLean Avenue in Yonkers, are the major sponsors of the Leitrim team in Ireland. And truth be told Sláinte 2020 is the brainchild of Caitriona.

As I noted in an earlier column, the New York footballers were supposed to play Galway in the first round of the championship on Sunday, May 3.  Of course, that didn’t happen, but the footballers did not sit idly by and moan and groan about missing their big day.

The trainers and tough taskmasters, the two Johnnys, Glynn and McGeeney, had the squad unleash all their pent-up energy by running 1,000 kilometers, basically a trip similar to the distance from Mizen to Malin head and back. The boys took the challenge in their stride they even ran a few extra hundred kilometers they loved it so much. According to reports they had plenty of fun, there were no injuries and nobody suffered from dehydration, especially afterward.

Of course, there was an ulterior motive for this bout of fanatical physical exertion, namely fundraising and that they achieved with aplomb. The day’s and night’s craic netted $40,000, plus there is still some outstanding money pledged. The New York GAA chairperson Joan Henchy expressed her gratitude to the players and management who really put their shoulder to the wheel for this very worthy cause.

“I could not be more proud of them,” she said, and in fairness to Glynn and McGeeney, they left no muscle unmoved in pursuit of their goal. Henchy added that it was a great honor to be partnered with Sláinte, and it was important that people be aware that donors are making a real difference in people’s lives during these scary times.

“We as an association and as exiles will never be found wanting. This is who we are, and that was never more evident last weekend,” Henchy said.

So far the units of the New York GAA have contributed over $75,000 to Sláinte 2020. Sometimes folks in unfamiliar garb at strange times may cause a bit of consternation. In my neighborhood, a woman was reported to have sprung from her bed, and pajama-clad, brandishing a hurley, rushed outside to confront four fearsome masked men who appeared to be prowling around with hardly honorable intentions.

Luckily for the fearsome foursome, when the fearless lady was about to split a skull, she realized it was her sons Conor and Shane, along with Ryan O’Neill and Dave Hansbury. Definitely, when you add Hans to the equation, it does become rather fearsome.

Anyway, all the boys wanted was a camera to record their iconic midnight run, and poor Fran thought they were casing the premises. All were reported to have slept like well-satiated babies afterward.

Well if the footballers could do their thing for Sláinte 2020, Team Aisling is gearing up to do their shtick.  Lately, they have been like a rebel without a cause.

Now Team Aisling has a real cause, namely Sláinte 2020. Word is that the dozen or so team captains are beginning to marshal their charges for a challenge that will incorporate the 4Fs philosophy of Team Aisling -- namely fun, fitness, friendship, and of critically needed fundraising in this instance. Watch this column for further information of this venture.

Meanwhile, the success achieved by the Sláinte 2020 project is obviously constrained by its fundraising capability. Dennehy poignantly stated that while enthusiasm and manpower abound, the stark reality is that the volume of support requests now vastly exceeds the funds on hand to lend that support.

For this reason, we are making a fervent appeal to those who are in a position to help us. Please consider making a donation so that we can make a meaningful difference to those who need it most at these very challenging times.  For more information contact www.slainte2020.org or mail donations to Slainte 2020, 990 McLean Avenue, Yonkers, New York 10704.