An Irish family’s tale reflected and remembered through the ebb and flow of the river in their homestead. 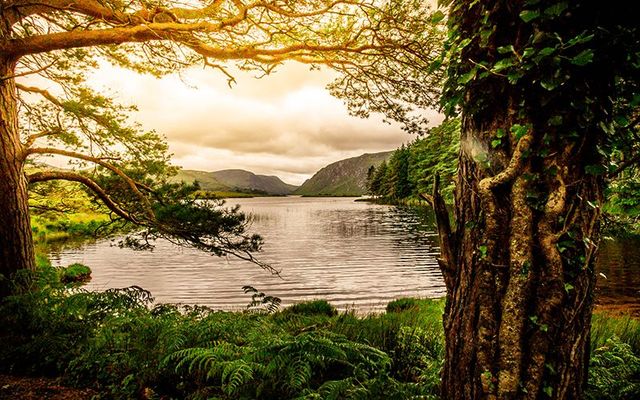 A river flowing through County Mayo reflects the tale of this family's lives. Getty

An Irish family’s tale reflected and remembered through the ebb and flow of the river in their homestead.

The river flowed through her life from the beginning, providing the chilly baptism of a child born too early. It was the place where vats were filled with water to be used to pound the bedding annually. She told me that it was the means by which the wool could be dyed using lichens for color and the barefoot children dancing in it were often lucky enough to see an eel or a fish.

She had carried the bucket to the river each day with her sister, Sile, and got splashed with water when Sile pretended she could not carry her side of the bucket and the water spilled out. The resentment would curdle in her as her sister. Sile would cry and plead for leniency and would be excused from carrying the water, but she, older and presumed stronger, would still have to carry the bucket though sometimes her father helped.

The water was cold, and the river was the means of washing herself for Mass and for her infrequent school career. It was at school that she and her siblings learned to speak English and came home to teach the language to their Irish speaking mother.

The river was the scene of many games with balls made of rags and boats made from reeds and childish laughter echoed around the Glen as the water was thrown and younger children were tormented. The whole family worked for the lace school which had been created as an economic project in their remote village. Delicate lacework required skill with the crochet hook, and at the age of four, her job was to crochet 144 buttons a day.

Her stern young mother would insist on the job being completed, but her quiet, older father would sometimes free her with the words: “She’s only a child let her play.” At those times, she would run to the river as fast as her long skinny legs could take her and revel in her freedom.

She was proud of her ability to read and when her father died of pneumonia leaving a house full of children, she remembered reading the word “mustard” on the compress covering his chest.

She was eight years old, the middle child in a large family and now equally responsible for her part of ensuring the family’s survival. Childhood was brief and the work was hard. They produced everything that they needed themselves milk for butter, potatoes, and eggs. It was not a sophisticated diet, it sufficed but they could not produce flour, sugar, and tea.

For those commodities, they needed Reilly’s store in the village of Bangor where the debt was recorded with the understanding that repayment would be made through the work of each of the daughters.

When the day came for her to leave the Glen and go down to the village to work in Reilly’s store and help pay off what her mother owed, it was to the river she walked to wash her feet and then cram them into a pair of shoes that did not fit.

She would live in Reilly’s for two years relieving the burden on her mother of providing food for her. It was a coming of age to walk away wearing shoes and feeling proud that your work would pay your family’s debts.

When thinking of home only a few miles away, she pictured the river and her family’s life revolving around it. When she laid down to rest, she heard its gentle sound and pictured how it looked when the sun glistened on it in the morning.

Each week she traveled home on the ancient bus from Ballina to Bangor, listening to it creak as it rattled through the bogs and villages until she climbed off and began the walk to the Glen. With her sisters, she gathered meadowsweet each Sunday and put it in her prayer book perfuming the pages and feeling like a lady of leisure when she walked to Mass.

It was the time of political upheaval, of trying to create a new country from the tragic past and in the Glen,  there was great resentment toward the new Free State government that had created a ruling elite while the unsatisfied hunger for land and justice still burned among them.

There was passionate excitement about the election of De Valera and his promise of plenty for the rural poor. She cast her vote not once, but twice though she was not old enough to vote. The finer details of democracy were a little hard to learn but the excitement of that day was forever remembered.

She loved to talk of that day ... and how the supporters of Fianna Fail were driving around in a truck to take people to vote and that she had plans to go back as many times as it took to make sure that Mr. De Valera was elected. She was recognized after voting the second time and forbidden to vote again.

Reflecting on that, she often said “well we had no experience with voting but we were overjoyed to have a chance”, Her brother had written a ballad about freedom and a new life for Ireland and she could quote his words with pride even sixty years later.

The promised economic miracle did not come, and in those times of relentless poverty, it was understood that one child would take over the land and all of the others emigrate to England or America. When the time came, she traveled to England to work as a servant in the homes of people whose wealth seemed enormous. She often reflected on those years working in England as a maid and she considered them the least work she had ever known. Those years were her teenage years when she was able to buy clothes and to send money home to help her mother every month.

The first time she had a day off and a coin in her hand she went to the cinema in a new dress and ate a whole tin full of toffee that caused her to be sick, and to hate palm toffee forever. She relished the notion of the unbelievable good fortune of having a room of her own. There was a problem though: her Irish accent. She was told not to speak to the children of the house until she lost her “brogue” and so for a whole weekend she practiced speaking in the tones of middle-class England. She learned never to call the woman of the house “missus” and to clip her words to crispness. A natural mimic, she met that challenge easily.

There was another challenge and that was to work her way through the hostile relationship between Ireland and its former colonizer, England. She bought a dress in red, white and blue with a picture of the king and queen on it and went to the cinema. At the end of the film, they played the British national anthem and she refused to stand. After she left the cinema she went to the Irish dance club and was told to remove the badge of the king and queen. She refused and was asked to leave. It was a time of political confusion and conflicting loyalties, and this independent young woman did not like to be told what to do.

The many years in England went by and for long periods of time the river receded in her memory. Until she married a man from a neighboring village and had five children to rear and returned each year to the Glen with them to wade in the river. Now the laughter she heard was that of her own children as they made their ancestral connection with the river.

And then one day the telegram came from home. Her mother was dying and so once more she took the long journey of boats, trains, and buses to get to the Glen arriving at night and walking by the river listening to its mournful sound she heard the voices of her family and the neighbors raised in prayer. The ancient cadence of the rosary and the sounds of the river told her that her mother was gone.

At the end of her own life, I traveled to the river with my mother, and she asked me to wait in the house while she walked alone to the river. She stood silently gazing into the water, and I believe, she watched her whole life flow through it.

I return now, let my hands sink into her water, bend down once more and splash the life of the Glen around me, hear the laughter of my children, now grown. She connects us all...

This is the story of my mother and the river of the Glen.