Will Joan Henchy be the first female to break that masculinity ceiling in the New York GAA? 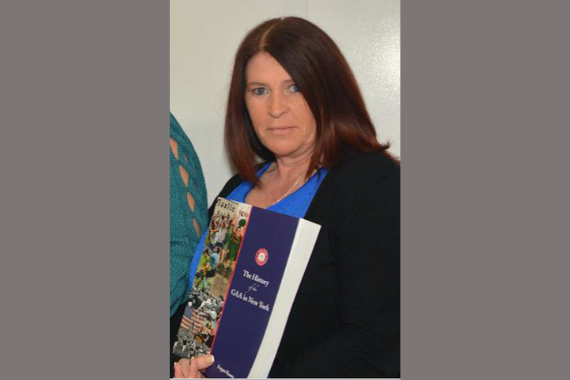 Will Joan Henchy be the first female to break that masculinity ceiling in the New York GAA?

On entering the Riverdale Steakhouse last Wednesday evening it was obvious that there was some serious business afoot.  First of all there was a rather large crowd assembled, but that’s not too unusual, especially if the proprietor, the genial Terry Connaughton is holding court.

However, this evening the patrons appeared a tad less convivial than usual.  There seemed to be less interest in the mundane matters as evidently more important issues were unfolding.

Invariably, despite the hushed tones, the sharply cocked ear could decipher that the prevailing question emerging from these enclaves of delegates was, “Is your man or your wan running?”

No, it wasn’t about an upcoming 5K or 10K, but the race for the top two positions in New York GAA, namely, that of chairman and secretary.

Granted there are a host of other positions in the Big Apple GAA with varying degrees of responsibility that have to be filled, but the chairman and secretary roles are the most arduous as the duo is responsible for conducting the main business of the New York GAA.

Gaelic Park, in the Bronx.

Term limits dictate that Laurence McGrath, the chairman, and Joan Henchy, the secretary, vacate their current positions, thus setting the stage for a contest to fill them. Once Larry McCarthy was assigned the position of chairing the nomination process, the speculation was over as Henchy was nominated for the top spot.

This was not exactly a surprise as the Yonkers-born Kerry delegate has made no secret of her desire to land the top job.  No doubt she could justifiably feel well equipped for the position after having held the secretary’s position for many years.

Of course, her quest for the leader position will also have historical implications as the prevailing culture of the New York GAA would reflect a bastion of male hegemony.  So will Henchy be the first female to break that masculinity ceiling in the New York GAA?

Not if Emmett Woods can help it as he has also thrown his hat in the ring for the top spot. The Tyrone-born Rockland delegate will be hoping that it will be second time lucky as he ran unsuccessfully against McGrath two years ago.  Naturally, Woods would also feel justifiably well equipped for the top job as he was one of the main movers and shakers behind the Rockland development.

With Henchy relinquishing the secretary’s position, there are two candidates vying for that position. Liam Bermingham, the outgoing assistant secretary, is one, while Seamus Smyth is the other. The Kildare-born Bermingham, currently a Tyrone affiliated delegate, has literally and figuratively been around the GAA block a few times as he is a former chairman and secretary, plus he is currently on the Development Committee.

Smyth, though well-known to GAA folks, is a relatively newcomer to the GAA boardroom. Smyth, aka Big Seamie, a Cavan man and a former New York manager mostly associated with the Donegal club for many years and later with the Celtics, is best known these days as the “Voice of Gaelic Park “ as he provides commentary from the home of Gaelic games in New York.

John Phelan (Waterford), the longest-serving delegate in the New York GAA, was nominated unopposed for the assistant treasurer’s post, while Clare McCartney (Rangers) retains the treasurer’s spot unopposed. Dennis Twomey (Rangers) also returns to his post as a development officer.

The board also gets new blood and certainly new ideas as Johnny McGeeney (St. Barnabas) slots into the tailor-made spot for him, namely coaching officer. There will also be a contest for the position of youth officer as the incumbent Seamus McNabb (Tyrone) is being challenged by Owen Cummins (Tipperary). There were four nominations for delegate to Congress: Bermingham (Tyrone), Conor McKenna (Monaghan), Brendan O’Sullivan (St. Barnabas),  and Smyth (Celtics).  The final number vying for this position will be contingent upon the result of the secretary’s position, as the secretary automatically attends Congress.

The elections will be held at the Riverdale Steakhouse on December 8 from 2-4 p.m.