Bridget Walls, 26, shared photographs from her wedding day on the video-sharing app and said that it was the "worst day" of her life. 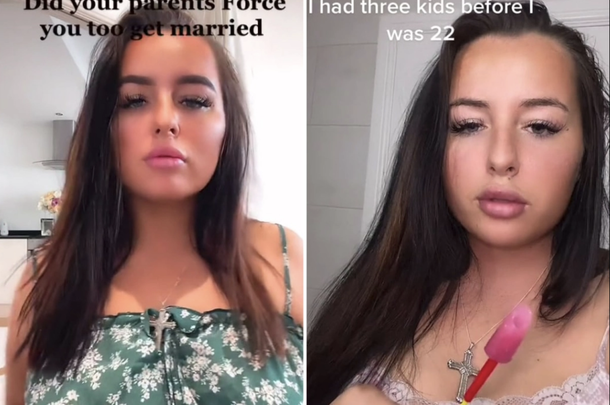 Bridget Wall (26) spoke out against marriage aged 16 and called her wedding day the worst day of her life. Bridget Wall / TikTok

An Irish Traveller took to TikTok to speak out against her forced marriage at the age of 16.

Bridget Wall, 26, shared photographs from her wedding day on the video-sharing app and said that it was the "worst day" of her life.

She revealed that she didn't know who she was getting married to until she arrived at the church and said that her husband was also 16 years old.

Wall and her teen husband were divorced by the age of 23 after having three children together.

"I was forced to get married. I didn't even know about my own wedding until that day. I didn't know I was getting married until the morning of my 16th birthday and I woke up, there was a big white wedding dress. I was forced to be married," Wall said on TikTok.

"It didn't really work out good. I got divorced at 23. It wasn't a good marriage but I was a child. I shouldn't have been forced into it. It is what it is."

In a separate post, she shared images of bruises that she said she suffered at the hands of her husband.

Wall told her 60,000 followers that parents often pick potential spouses for their children because they know them well. She added that parents occasionally force first cousins to be married, although she said that this was very rare.

She said that she wouldn't force her worst enemy to go through a forced marriage and said that her children will be allowed to be their own person.

"I'm going to support their dreams and support what they want to be. The Travelling community are dream crushers. When I was younger I wanted to work in a nursery and look out for children, but I was pulled from school when I was 12.

"I'm going to support my children in their full education and support them to be whatever they want to be in life."