Seán Gavagan hadn’t seen his Dad for six months and he just started to cry. 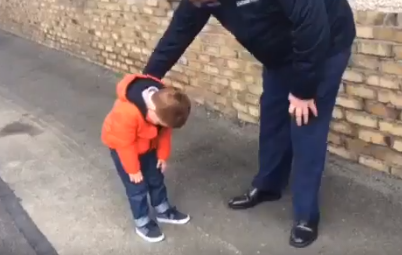 Seán Gavagan was just overcome after not having seen his Dad for so long. Stephanie Grogan/Twitter

One little Irish boy was so overcome with emotion after not seeing his Dad for six months that he was unable to move from crying.

Captain Ian Gavagan and his comrades in the Irish Army spent six months peacekeeping for the UN along the Israeli-Syrian border and their long absence was keenly felt at home.

Their return to Dublin’s Casement Aerodrome saw family and friends cheer them loudly, proudly waving tricolors as they made their first steps onto Irish soil in months.

But for little Seán Gavagan it was all a bit too much and whilst his mammy and sister raced to greet his Dad he was immobilized with the emotion of it all.

The excitement of Daddy coming home after 6 months in the Golan Heights proved too much for this little boy who broke down crying pic.twitter.com/oKCiw0wxMW

A man, thought to be a colleague of Capt Gavagan, went to give him a little pat and helped him forward toward his waiting family.

The 55th Infantry Group had been monitoring a UN ceasefire in the Golan Heights along Israel and Syria’s contested border. The area has been described as one of the “most dangerous UN missions in the world” and is crawling with jihadists.

Read More: A dramatic vindication for the Irish heroes of Jadotville

Israel has occupied 460 square miles, roughly two-thirds of the area, since the Six Day War in 1967 and de facto annexed it 14 years later. The other third remains under Syrian administration and the UN operates a buffer zone between the two.