The Tipton twins rocketed to fame when they proclaimed that "no sex and plenty of Guinness" were the secrets to a long life. 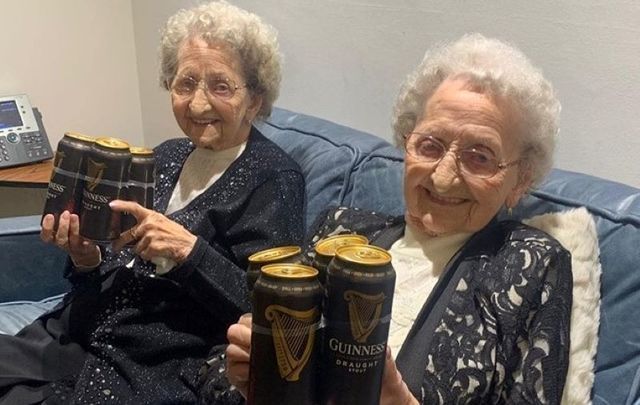 Lilian Cox and Doris Hobday were the oldest twins in Britain prior to Doris's death. Lil & Doris Facebook

Doris Hobday, one of the famous Guinness-loving "Tipton Twins", has sadly passed away after contracting COVID-19.

Hobday and her twin sister Lilian Cox both rocketed to fame after an interview on the British chat show "This Morning" where they proclaimed that "no sex and plenty of Guinness" was the secret to their long lives.

The 96-year-old twins were the oldest twins in Britain and had been cocooning throughout 2020 to reduce the risk of contracting the coronavirus but tested positive for the virus shortly after Christmas when Dirus developed a fever and Lilian developed a cough.

The twins proclaimed their "shock" after testing positive for the virus as they had kept their contacts low and followed all the rules but said in a Facebook post on January 4 that "if him up there wants us... he's going to have to run fast".

However, Doris's condition deteriorated shortly after that Facebook post and she died in Sandwell Hospital on January 5.

"We are devastated to announce that Doris didn’t make it... she passed away on Tuesday 5th January after a short stay in hospital. She was still running fast but unfortunately had some hurdles put in her way and she wasn’t strong enough to fight Covid," a post on the Lil & Doris Facebook page said.

Doris's family thanked staff at Sandwell Hospital for their care and for allowing Doris's grand-niece Kerry to accompany her during her last moments as she passed away "peacefully".

Lilian, meanwhile, was also rushed to hospital and "had the fight of her life" for two weeks on a combination of oxygen, vitamins, and antibiotics but was thankfully discharged from hospital on January 18.

Lilian was only told of her sister's death once "she was strong enough to take the news" and is being comforted by family. She is staying with her daughter Vivien while she continues her recovery from the virus.

The post also urged people to take the COVID-19 pandemic seriously and to take the coronavirus vaccine if given the chance, stating that Doris received a letter two days after her death confirming her vaccination appointment.

"Doris was only a few weeks away from being safe," the post said. "If you are offered the vaccine please take it, do not refuse it... Doris didn’t get this choice."

Doris will be laid to rest on Monday, February 15, and will be buried beside her late husband Ray, who died 11 years ago.

"We are aware they are both 96 years old and we have been so lucky to have them in our lives for such a long time but they were both still going strong before this virus got them and both were determined to live until 100, they had so much to look forward to... it’s just so cruel that Covid has stopped Doris like this," the Facebook post said.