The village of Corrandulla is aiming to raise €15,000 for local resident Kevin Williams after his thatched roof was destroyed by a fire in April. 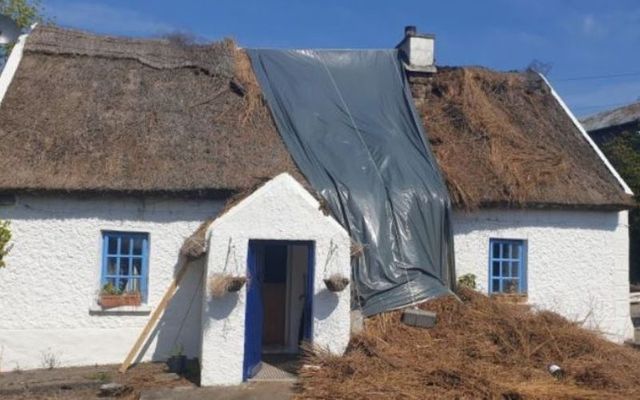 Williams' thatched roof was destroyed in the blaze. GoFundMe

A Galway community has launched an online fundraising campaign for a neighbor whose thatched cottage was badly damaged in a fire last month.

Kevin Williams, from the village of Corrandulla in County Galway, was alerted to a fire in his home when he heard his dog Spike barking in his kennel.

"He’s never barked since the day we got him so I went out to him. When I did, I could smell something and there it was – fire coming out of the chimney. Only for the little dog it would have been burnt to the ground," Williams told the Connacht Tribune.

Williams used a garden hose to dampen the flames on his thatched roof while he waited for the fire brigade to arrive but was unable to prevent the blaze from destroying the roof.

The whole roof must now be rethatched without the benefit of insurance, Williams explained. The painter decorator told the Connacht Tribune that he lost his insurance due to the economic hardship of the pandemic and said that it will cost roughly €15,000 to repair the roof.

Williams and his partner Geraldine Jennings stayed with their neighbor Neil Haigh in the immediate aftermath of the fire, but they have now returned to live in the one room that was not badly damaged by the blaze.

Meanwhile, Haigh's wife Delia has set up a GoFundMe with a view to raising the €15,000 necessary to repair the roof. Williams plans to use his painter decorator expertise to repair the interior of the property himself.

Click here to find out more about the fundraiser or to make a donation.