Clare Island GAA is aiming to raise €40,000 on GofundMe to build changing rooms and a new covered stand. 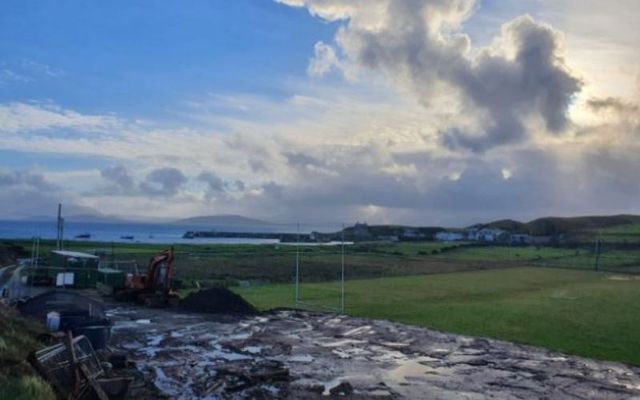 Clare Island GAA's pitch is one of the most scenic pitches in Ireland. GoFundMe

A GAA club on Clare Island, one of Ireland's most sparsely-populated islands, is running an online fundraiser to build changing rooms and host year-round Gaelic football games and training.

Clare Island is one of the largest islands in Clew Bay off the coast of Mayo but only has a population of roughly 150 people. The island's GAA club fields male and female teams in the All-Island championships every year, while its school teams regularly compete at underage level.

Like many parts of rural Ireland, GAA is the lifeblood of the Clare Island community, but Clare Island GAA club is currently unable to host year-round matches and draining due to a lack of permanent changing rooms.

With that in mind, the club is aiming to raise €40,000 on GoFundMe to fund the construction of permanent changing rooms on the island for the first time. The fundraiser also aims to raise money for a sheltered viewing stand above the pitch to keep spectators dry on wintry days.

The organizers of the fundraiser hope that the new changing rooms and covered terrace will allow Clare Island GAA to host year-round Gaelic football matches and training in addition to children's camps.

The club hopes to host all Mayo GAA squads for training weekends once construction is completed. The club has previously hosted the Mayo senior ladies team and the Mayo minor football team for training during the warmer months.

Clare Island's GoFundMe has raised more than €20,000 of its €40,000 target, while the GAA club has also secured a €43,000 grant from the Irish Government's Sports Capital Programme initiative. The club estimates that the total cost of construction will be roughly €100,000.

Sinead Flynn, whose father was born on the island, said that the renovations would bring tourism to the scenic GAA pitch once the COVID-19 pandemic was over, which would give a significant boost to the local economy.

Flynn's 83-year-old grandmother still lives on Clare Island and she said that the island has managed to contain the COVID-19 pandemic so far.