It was a stunning act of generosity. A woman from Enniskillen in County Fermanagh has donated a rare and highly valuable banknote to charity. 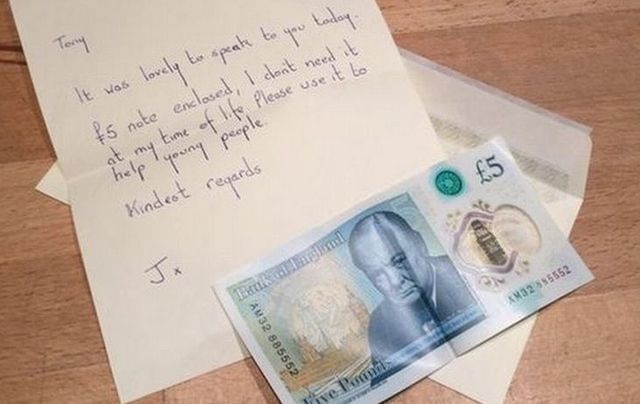 It was a stunning act of generosity. A woman from Enniskillen in County Fermanagh has donated a rare and highly valuable banknote to charity. Tony Huggins-Haig Gallery.

A woman from Enniskillen in County Fermanagh has donated a rare and highly valuable banknote to charity. The limited edition £5 banknote, worth £50,000 ($62k), will be put up for auction in aid of Children in Need.

The pensioner - identified only as ‘J’ - noticed that the £5 note in her purse was one of four limited-edition prints. The kindly pensioner then sent the note off to a gallery in Kelso, Scotland, called Tony Huggins-Haig, where it was created with in conjunction with Birmingham micro-artist Graham Short.

“It was lovely to talk to you today.

“£5 note enclosed, I don't need it at my time of life. Please use it to help young people.

The note looks almost exactly alike all other £5 notes issued by the Bank of England in 2016. On one side is Sir Winston Churchill and on the other the reigning Monarch Queen Elizabeth II.

The hidden picture of Jane Austen which could make your £5 note worth £20,000! https://t.co/XEhDGWhidj pic.twitter.com/bSAK8EgLb1

However, unlike the other millions of £5 notes in circulation, this one has a small portrait of 19th century author Jane Austen.

It is thought the note will now be auctioned off with the proceeds going to Children in Need, one of Britain’s most prominent charities that has, since it was launched in 1980, raised close to $750 million to help vulnerable young people.

Read more: Could your old Irish coin collection be worth thousands?