Canadian ambassador to Ireland Kevin Vickers thanks his Irish mother for calling him home as he struggled to cope with the traumatic terrorist ordeal. 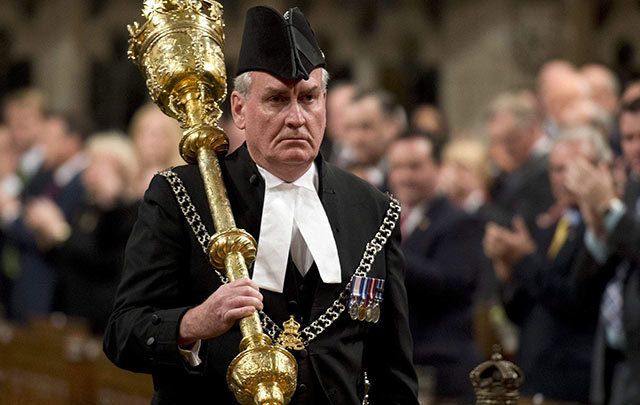 Kevin Vickers serving as Sergeant of Arms in Canada’s House of Commons in 2014.

Canada's ambassador to Ireland Kevin Vickers, who put an abrupt end to a terror attack in Ottawa by shooting a man dead, has praised his Irish heritage for helping him cope with the traumatic ordeal.

In a podcast with the Irish Independent, Vickers told Paul Williams about that fateful day in 2014 when he had to take down a gunman inside Canada’s House of Commons. Vickers was hailed as a hero for his quick thinking in stopping the terrorist.

He also captured headlines in Ireland again in 2016 when he tackled a protester who had broken through police barriers at a private Easter Rising commemoration event. The memorial in question was to remember British soldiers who died during the rebellion and Vickers held the shouting and disruptive man on the ground until gardaí (Ireland's police) arrested him.

Before he became a diplomat Vickers, whose mother’s family came from Bantry. Co. Cork, worked as a policeman and as a homicide detective in Canada, posts that prepared him in some way to deal with the weight of his actions. He had risen through the ranks before he was chosen to become the national parliament’s head of security. He was serving as Sergeant of Arms in Canada’s House of Commons when the terrorist attack took place in 2014.

Although Vickers claims he acted on impulse both at the House of Commons and at the event in Dublin, his training came into play and he dealt with each incident without thinking of the impact it would have on himself.

“He sequestered himself behind a pillar just before you go into the library in our parliamentary building,” Vickers told Williams of the day terrorist Michael Zehaf-Bibeau killed a guard and injured three others at Parliament Hill in Ottawa.

“I could see his rifle behind the pillar. There was a moment when I thought I would just reach out and grab the gun, just pull it. But, while I was thinking that he shot and fired.

“As he shot and fired I dove through the air in front of him, shooting once. I know I hit him because I remember this big painful shriek. I fell heavily to the floor directly beneath him and that is when I shot him another 14 times at point-blank range.”

It was only later that day that the full effect of what he’d just experienced hit him, but thanks to the powerful force of his Irish mother and his Irish background he was able to deal with the ordeal.

“Later that night, at 3am, I woke up alone and I was crying. It was the loneliest moment of my life,” he admitted in the podcast.

“On the Saturday morning, my mother said: ‘Caoimhin Michael, I want you home’.

“I asked what am I going to do when I get home and I thought of these 17 men that I took confessions from for homicides and I thought: ‘I am going to pray for them.’

“I always remember my dad taught me that regardless of how repulsive the crime, you always respect the dignity of the person. I went down to the river after that where I used to fish as a young boy and now fish for salmon as a man and I just said to myself: ‘Mother was right. I needed to come home’.”

Read more: The 1916 commemoration for British soldiers remembered my own relative

Speaking of the incident in Grangegorman in Dublin last year Vickers stated that he doesn't regret his actions despite the fact that they were not welcomed by the Canadian Prime Minister Justin Trudeau.

The incident was witnessed by a writer for IrishCentral who was attending the Easter Rising event. "The ceremony was just beginning when one protester, who had somehow managed to get past security, stood up from the crowd attempting to make a scene. Thanks to the quick thinking of the Canadian Ambassador to Ireland Kevin Vickers … the protester was tackled and bundled away, allowing the ceremony to continue, undisrupted.

“I was sitting there with other dignitaries and I caught, out of the corner of my eye, a gentleman getting up,” Vickers told the podcast.

“As he was getting up he was opening his jacket. Right then and there I think that fired a trigger in me and made me rush towards him.”