An Illinois bishop has issued a decree against gay couples, reiterating the church's stance that marriage is a “covenant between one man and one woman.” 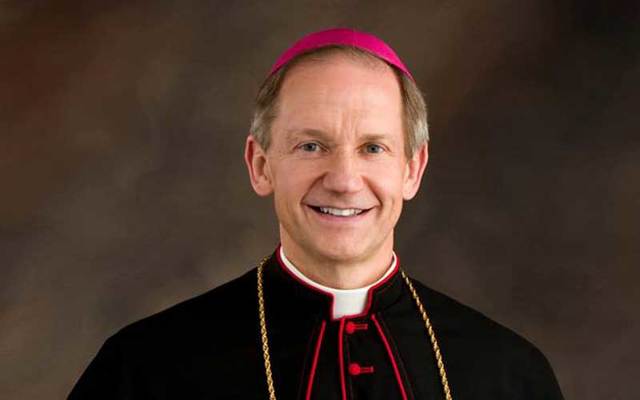 A Catholic bishop in Illinois has called for priests in his diocese to deny Holy Communion, blessings, and funeral rites to people in same-sex unions.

The Washington Post reports that Bishop Thomas Paprocki, of the Catholic Diocese of Springfield, Ill., has decreed that people “living publicly” in same-sex marriages may not receive the sacrament of confirmation or be admitted to the Rite of Christian Initiation of Adults, by which many converts become Catholic.

In the decree, the bishop states that both last rites and funeral rites to individuals in same-sex unions will be denied unless they show “some signs of repentance” for their relationships before death.

Children living with a Catholic parent or parents in a same-sex marriage can be baptized, but priests are not allowed to bless same-sex couples, and church property cannot be used for ceremonies and diocesan employees are forbidden from participating.

The bishop’s decree reiterates the church’s teaching that marriage is a “covenant between one man and one woman.” The Catholic church’s official catechism states that “homosexual acts are intrinsically disordered.”

Bishop Paprocki wrote in the decree: "While being clear and direct about what the Church teaches, our pastoral ministry must always be respectful, compassionate and sensitive to all our brothers and sisters in faith."

"They are also warned that culpable violation of any of these norms can be punished with a just penalty," he said.

The decree was sent to clergy and staff in an email last week but had not yet been made public by the diocese. The email was shared with clergy around the country, as well as Catholic LGBT organizations, which posted the document and condemned it.

“Although some other bishops and dioceses have instituted similar policies in part, this document is mean-spirited and hurtful in the extreme,” Christopher Pett, incoming president of DignityUSA, said in a news release from the organization, which advocates for LGBT Catholics.

When same-sex marriage was legally recognized in Illinois four years ago, Paprocki “performed an exorcism in response to the law, suggesting politicians were ‘morally complicit’ in assisting the sins of same-sex couples,” reported the Chicago Tribune.

Since the Supreme Court’s 2015 ruling in Obergefell v. Hodges, gay marriages have been legal across the United States.

In a statement provided to The Washington Post, the 64-year-old bishop, who has served the Springfield diocese since 2010, said of the decree: “These norms are necessary in light of changes in the law and in our culture regarding these issues.” The decree states:

Jesus Christ himself affirmed the privileged place of marriage in human and Christian society by raising it to the dignity of a sacrament. Consequently, the church not only has the authority, but the serious obligation to affirm its authentic teaching on marriage to preserve and foster the sacred value of the married state.

Last year, Pope Francis released a 256-page document, “The Joy of Love,” affirming the church’s traditional views on marriage. However, the pope said unconventional unions are not without their “constructive elements,” and he called on Catholic clergy to not use doctrine as a weapon.

"I understand those who prefer a more rigorous pastoral care which leaves no room for confusion," Pope Francis wrote. "But I sincerely believe that Jesus wants a church attentive to the goodness which the Holy Spirit sows in the midst of human weakness."

In his latest book, “Building a Bridge: How the Catholic Church and the L.G.B.T. Community Can Enter Into a Relationship of Respect, Compassion and Sensitivity,” noted Jesuit author Rev. James Martin also calls for a gentler approach. In a Facebook post he said of the Paprocki decree:

If bishops ban members of same-sex marriages from receiving a Catholic funeral, they also have to be consistent. They must also ban divorced and remarried Catholics who have not received annulments, women who has or man who fathers a child out of wedlock, members of straight couples who are living together before marriage, and anyone using birth control. For those are all against church teaching as well. Moreover, they must ban anyone who does not care for the poor, or care for the environment, and anyone who supports torture, for those are church teachings too. More basically, they must ban people who are not loving, not forgiving and not merciful, for these represent the teachings of Jesus, the most fundamental of all church teachings. To focus only on LGBT people, without a similar focus on the moral and sexual behavior of straight people is, in the words of the Catechism, a “sign of unjust discrimination.”