Computer Science teacher Fachtna Roe told the Labour Court that the statue caused him "offense and upset" and said that he attempted to remove it because it was a symbol of oppression and cruelty. 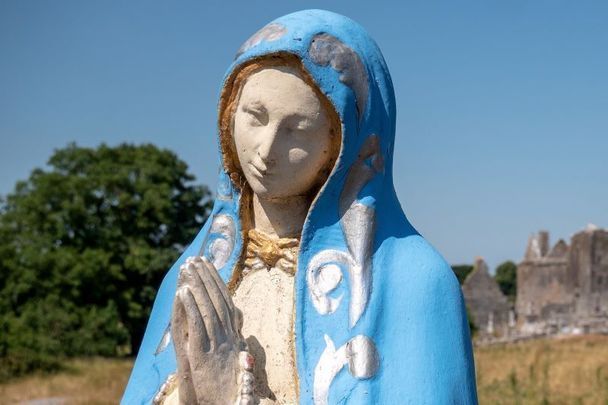 A statue of the Virgin Mary at Quin Abbey in Co Clare. Getty

A school caretaker became involved in a physical tussle with a humanist teacher at a vocational school in Tipperary after the teacher attempted to remove a statue of the Virgin Mary, the Labour Court has heard.

Caretaker Noel Lonergan of Central Technical Institute (CTI) Clonmel labeled Computer Science teacher Fachtna Roe a "disgrace" after Roe attempted to remove the statue from the main entrance of the school on the grounds that it was a symbol associated with oppression, cruelty, and humiliation of women and children.

Lonergan erected the statue on May 1, 2015, as part of his duties as caretaker of CTI.

Roe told the Labour Court that the statue caused him "offense and upset" and said that he attempted to remove it because he viewed it as a victimization of him.

He said that Lonergan intervened when he attempted to remove the statue, resulting in a physical tussle and a heated verbal exchange.

Meanwhile, Lonergan, who is now retired, told the Labour Court that he told Roe to back away but said that the Computer Science teacher refused.

Lonergan said that he was subsequently shoved backward into an object and sustained minor injuries to his hand and neck, prompting him to call Roe a "disgrace".

The former caretaker told the court that he was angry and stressed at the time and apologized for calling Roe a disgrace.

Jonathan Nolan, a teacher at CTI who broke up the confrontation, told the Labour Court that Roe and Lonergan appeared to be in a tussle over an object and said that both men had their hands on the object. School principal Charlie McGeever, who has since retired, told the court that a physical confrontation between two staff members was of "grave concern".

Roe lodged a case in the Labour Court, stating that he was discriminated against, harassed and victimized on the grounds of religion by the Tipperary Education Training Board over the installation of a May altar at CTI.

Haugh said that Roe had not established any facts to prove discrimination and additionally found that the Computer Science teacher was not the subject of victimization.

Haugh added that neither Lonergan nor school principal Charlie McGeever had shown any ill will toward Roe in their evidence and dismissed Roe's claim of harassment against Lonergan concerning the physical tussle on May 1, 2015.

The Deputy Labour Court Chairman said that Roe was seeking to remove an expression of religious belief that he did not ascribe to and that Lonergan was preventing Roe from interfering with an expression of faith from other members of the CTI community.

Haugh said that Lonergan accepted that he acted inappropriately and disproportionately.

Roe first complained about the Blessed Virgin Mary statue in 2012, prompting the school to move the statue in a bid to diffuse the issue.

He said that the installation of the statue was done to make him feel inferior as a humanist and argued that the statue represents "Roman Catholic dogma", which humanists oppose. He further argued that religious dogma had no place at a vocational school.

The Labour Court report states that Roe and Lonergan were subject to disciplinary proceedings following the altercation in 2015 and that Roe was relocated to alternative teaching duties in Templemore, where he teaches today.

Roe had previously lodged a complaint to the Equality Tribunal in 2014 over the distribution of Ash Wednesday ashes during one of his classes, resulting in a mediated settlement between Roe and CTI on April 27, 2015, just four days before the altercation with Lonergan.

The Labour Court ruling came after four days of evidence at a virtual courtroom and upholds a decision by the Workplace Relations Commission in 2017.