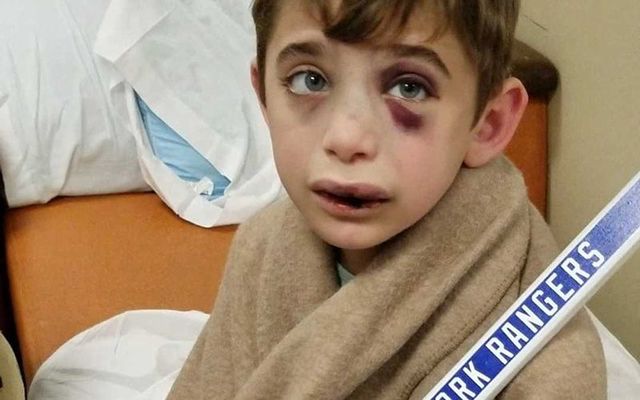 Eleven-year-old Brendan O’Callaghan was seriously injured when his New Jersey school bus collided with a dump trump killing his teacher and a classmate. The schoolboy, from East Brook Middle School, Paramus, doesn’t remember the crash and thinks it was a bad dream.

Arnie O’Callaghan, Brendan’s father told NorthJersey.com he feels lucky that his son is alive. O’Callaghan, a police officer in Dumont, was driving when he got the call. He followed the other police vehicles until they reached the hospital not knowing whether Brendan was alive or dead.

“He feels like he's in a bad dream,” O'Callaghan said.

“My son has no recollection - he asks if he missed the trip to Waterloo Village.

“He asks me how to escape from this dream. He grabs my ear, touches my face and asks if this is real.”

The fifth-grader’s father told the press his first words when he woke up were “Daddy, am I going to die?” The young boy suffered a fractured temple bone, broken collarbone, punctured lung and a bruised orbital bone. According to nj1015.com Brendan is scheduled for surgery on Tuesday for a fractured temple bone also his nose will need to be reconstructed.

He was one of 43 people injured in the crash. Brendan has not been told yet that his teacher, Jennifer Kenned,y who he was particularly close to, and his classmate Miranda Vargas lost their lives.

He smiled for the first time after last Thursday’s crash when he received a surprise gift from the New York Rangers ice hockey team, this weekend.

I have to edit this post and thank Kevin Moran from Paramus Hockey and Dan Meyers and the rest of his hockey supporters for making this moment happen. Words can not express. A package was delivered with a signed New York Rangers Goalie stick signed by Brendan's Hockey Idol Henrik Lundqvist and a signed card from the new York Rangers Organization. This made his day seem so much more brighter for him the most alert I've seen him. Keep Praying for all the families and kids who were involved in this horrific accident . The support has been tremendous throughout friends, family, community and staff of Paramus East Brook Middle School . My family can't thank you all enough. Thank you to East Brook Middle School Principal Tommy LoBue and East Brook Staff Dana Focarelli, Chris Nutlend, and L.E.A.D.S. Officer Fox from the Paramus Police Department commit to visit today. He remembered every one of you and I can feel his happiness when you all showed up. I know inside he felt realism for the first time . And also my father who reached out to the New York Rangers to brighten a grandsons day .

The accident took place last Thursday afternoon (May 17) on Interstate 80. There were 45 people on board the Paramus school bus including 38 fifth graders (aged between 10 and 11) and seven adults including the driver.

The school children had been on a field trip to Waterloo Village, a historic site depicting a settlement of the Lenape Native American community.

The bus driver has been named a 77-year-old retiree Rudy Muldrow Sr. who was driving the bus on behalf of the Paramus school district.

The crash was filmed by a Department of Transport camera which shows Muldrow trying to make a U-Turn, across several lanes of traffic, after missing the exit they were meant to take. Having missed the Exit 25 to Stanhope, instead Muldrow carried on and attempted to use a police turnaround on the highway.

Muldrow’s bus was smashed by a red Mendez Trucking dump truck, which was traveling in the same direction. The bus carriage went flying off its chassis and into the median with all the children inside.

The funeral of Miranda Vargas, the fifth-grader who was killed will take place on Monday, while the teacher, Jennifer Kennedy, will be remembered at a service on Thursday.