When Ellen Fleming logged into her bank account earlier this week, she found $1.1 million instead of the $50 that was supposed to be there. 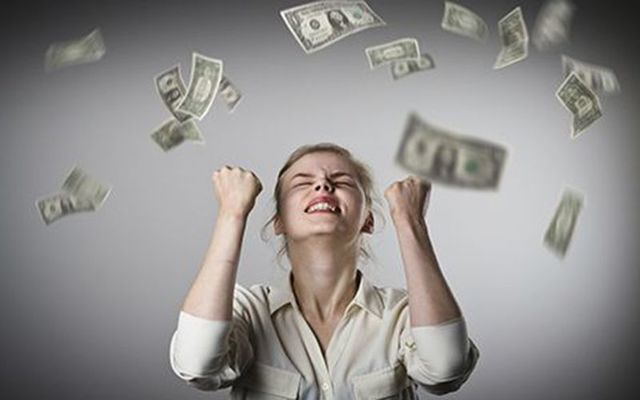 A woman stands under money falling from the sky. iStock

One Boston woman was stunned to find $1.1 million dollars had been deposited into her bank account.

Ellen Fleming, 26, received a voicemail from a TD Ameritrade financial consultant earlier this week telling her that a deposit had been made into her account, the Daily Mail reports. Curious, she logged in to her account on her cellphone and found a seven-figure sum instead of the $50 that was supposed to be there.

A bank account that I had $50 in had over $1 million dollars deposited into it. A banker made a HUGE mistake and confused me with another Ellen Fleming. I was rich for 10 mins & I can tell you, life was in fact better. I'm now humbled from loosing all my money. pic.twitter.com/skwlbUodTY

For a few moments, Fleming entertained thoughts of quitting her job and paying her student loans, but she instead called the consultant and told them there had been some sort of mix-up.

The money was meant for a Florida woman with the same name.

In a series of tweets, she joked about the incident.

“Ahhh, the sweet, sweet smell of reality. Back to work, not a millionaire, a much larger woman just tried to fight me on the train unprovoked. It's the little things in life,” she wrote.

Ahhh, the sweet, sweet smell of reality. Back to work, not a millionaire, a much larger woman just tried to fight me on the train unprovoked. It's the little things in life.

Fleming told the Boston Globe that when she saw the large sum in her account she thought “I could quit my job, do whatever I wanted to do, pay off my student loans.”

Read More: Let Brian Kelly from The Points Guy show you how to travel like a millionaire

However, the dream only lasted for about 10 minutes until she started thinking of how trying to keep the money could lead her “to a federal prison.”

The “errant deposit” has now been fixed and Fleming’s account balance is now $63.