Annie Birney and Eoin Boyle beat more than 50,000 applicants to the role of caretaker on Great Blasket Island before the COVID-19 pandemic. 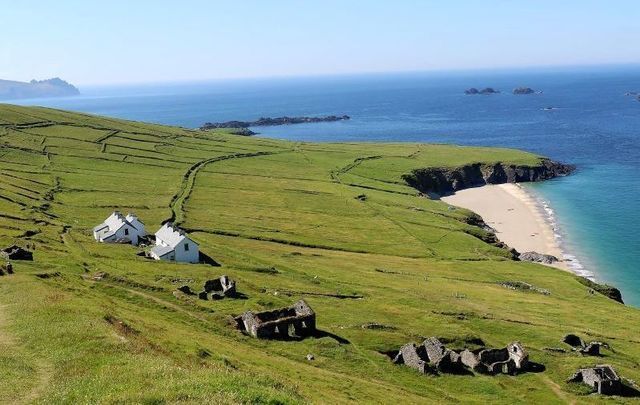 An Irish couple who landed the job of a lifetime on a remote Irish island off County Kerry were forced to put their dreams on hold due to the COVID-19 pandemic.

Annie Birney and Eoin Boyle beat more than 50,000 applicants to the role of caretaker on Great Blasket Island off the Dingle Peninsula earlier this year and were due to take up the role in April.

What was supposed to be a six-month stint on the scenic island was suddenly cast into uncertainty as the Irish Government imposed lockdown restrictions to curb the spread of the virus.

Suddenly, Irish citizens were confined to within a two-kilometer radius of their own home while everything from pubs to hotels and museums to football pitches closed down.

Great Blasket Island, a popular summer destination for daytrippers and holidaymakers, fell under that bracket and closed to all visitors for more than three months.

Situated off the Dingle Peninsula, Great Blasket Island is one of the most westerly points in Europe and features spectacular views and rugged landscapes. With no hot running water and just about enough electricity to charge a cell phone, the island is a huge draw for tourists looking to get away from it all.

However, with COVID-19 bringing Ireland to a standstill, it was now possible that the island wouldn't open at all in 2020.

That left Birney and Boyle in a precarious situation.

The couple had quit their jobs and prepared to move out of their Dublin apartment to take over caretaker duties on the island, including running the island's coffee shop and maintaining the three holiday cottages on the 1,100-acre island.

Now, Birney and Boyle didn't know if they'd get to stay on the island at all.

She said that their problem seemed small in the context of COVID-19 and that they took it week-by-week and the island eventually reopened on June 29, cutting their stint in half but at least ensuring that they could spend some time on the beautiful island.

Alicia Hayes, who runs tours to the island and owns the three vacation cottages along with her partner Billy O'Connor, said that she saw a scenario where the island wouldn't open at all.

"We didn't have much hope for the season," she told CNN.

Hayes spent lockdown on the island with O'Connor and their two children, maintaining the cottages and the landscape and looking after livestock on the island.

In January, Hayes and O'Connor posted an advertisement for the role of caretaker online and the post went viral, prompting more than 50,000 applications.

The pair were taken aback by the huge level of interest and had to filter through thousands of applications before arriving at Birney and Boyle's.

Hayes said that they stood out because they sent a handwritten letter along with an attached photo of themselves, something that Hayes and O'Connor thought was "very old school."

The couple thus got the chance to live out the summer of a lifetime, albeit a shortened one, on the stunning Irish island.

It's not all fun and games, however.

While the island's coffee shop may have remained shuttered due to the COVID-19 outbreak, there is still plenty of work to be done.

The absence of electricity on the island means that everything has to be down by hand or, as Birney describes it, with "elbow grease."

The couple can heat water through a kettle and cook with a gas stove, while Hayes and O'Connor have to bring fresh supplies every few days as there is no fridge or freezer on the island.

They must also contend with the horrors of cold showers since there is no running hot water and Boyle humorously told CNN that "some days are easier than others."

Birney, however, said that the problems are worth it to live on such a beautiful piece of land.

"When you sit down at the end of the day, it's a lovely feeling," she said.