The Canadian Irish community call for a station in the historic Montreal community of Griffintown to be named Station des lrlandaise. 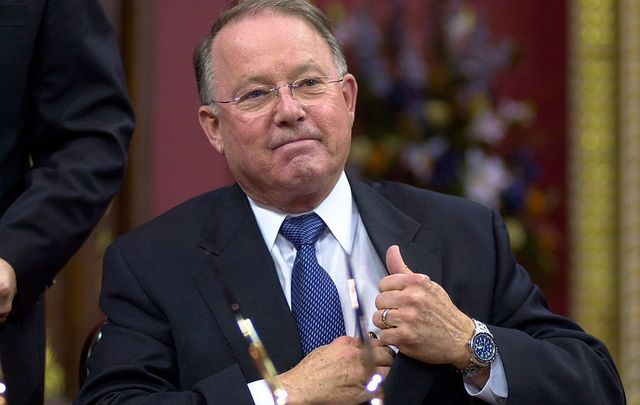 Bernard Landry replaces his pen after signing the papers to officially become the new Premier of the Canadian province of Quebec March 8, 2001, during a ceremony at the National Assembly in Quebec City. Pierre Roussel/Newsmakers

The Canadian Irish community call for a station in the historic Montreal community of Griffintown to be named Station des lrlandaise.

Members of the Montreal Irish community are disappointed, dismayed and taken aback at the suggestion of Montreal’s mayor Valerie Plante to name a new station after the late Quebec sovereigntist and former premier Bernard Landry. The new REM rapid transit station will pass through the historic Irish community of Griffintown.

Landry, who died last year neither lived, represented or had any real connection to Griffintown. The closest he comes to it is that he was responsible for the creation of the Cité du Multimédia, a 1990s project to attract tech developers to the city that lies adjacent to Griffintown and downtown Montreal.

The mayor’s proposal, which was announced on Twitter came as a complete surprise to the Irish community whose roots in Griffintown (named after a colorful Irish landlord of the late 18th and early 19thCentury) run long and deep. She suggested that the station be called "Griffintown-Bernard-Landry."

Read more: Could Montreal finally be getting a commemorative park for the 6,000 Irish who died there?

"Griffintown—Bernard-Landry Station would highlight Mr. Landry's important contribution to the development of our city," Plante wrote.

In response, the community started a petition against the name.

Fergus Keyes, a director of the Irish Memorial Park Foundation, a group dedicated to the founding of a park in memory of 6,000 victims who lost their lives fleeing the Great Irish Famine of the 1840s and who are buried in a mass grave on Montreal’s shore, said it is an insult to the immigrants (not only the Irish) who did so much to build the city.

"They've been mayors; they've done a great number of things in contribution to the city, so, yeah, it's a bit of an insult to just kind of ignore that."

At its peak, the population of this Irish shantytown stood at 60,000. The Griffintown Irish built the Lachine Canal, the Victoria Bridge, and St. Mary’s Hospital and up to 40% of Quebecers claim Irish roots.

After the creation of the Bonaventure Expressway, intended to connect the site of Expo 67 to the city of Montreal which physically split the community and consequent re-zoning to encourage industrial development, the population of Griffintown by 1970 had dropped off by more than 70%.

Today, Griffintown is an urban concentration of modern condominiums with very little to connect it to its Irish past.

"Griffintown has a 150-year history of being an Irish working community of Montreal, and now as it's being redeveloped all the time, this Irish history is being lost," Keyes said on CBC Montreal's Daybreak, added that he felt blindsided by Plante's decision.

Montreal historian, educator and activist, Donovan King said that the mayor’s suggestion felt like a “kick in the teeth” considering she would have been aware of the Irish community’s sentiment to remember and celebrate its historic connection and contribution to the city, the province and the country.

You can support the petition here.