5,000-year-old Bealtaine lighting of fires goes ahead despite coronavirus

Fires on the Hill of Uisneach went ahead on the evening of May 5 to mark the ancient Celtic celebration of summer. 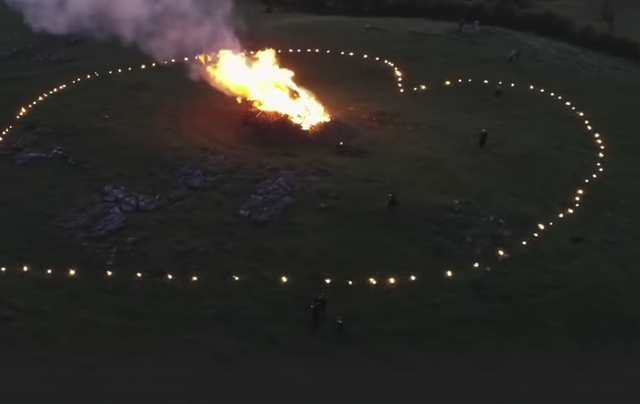 Despite COVID-19, the Neolithic, 5,000-year-old celebration of Bealtaine went ahead. RTE / YouTube

COVID-19 was not going to get in the way of the Neolithic festival of Bealtaine and the fires on the Hill of Uisneach went ahead on the evening of May 5 to mark the ancient Celtic celebration of summer.

Despite the coronavirus pandemic, the 5,000-year-old tradition of lighting the Bealtaine Fire on the Hill of Uisneach in County Westmeath went ahead on Tuesday evening with just the Keeper of the Hill and his family in attendance.

Usually, a dramatic annual event, based on an ancient Celtic festival, celebrated by thousands of people on the ground this year, due to COVID-19, David Clake, the Keeper of the Hill, celebrated a very different Bealtaine.

Bealtaine marks the start of the summer season. For thousands of years in Ireland, bonfires were lit to welcome the summer's arrival.

The official event was due to take place on Saturday but was canceled due to social distancing rule put in place due to the pandemic.

The Hill of Uisneach is a very important sacred site to the ancient Irish history, as it is at the exact center of Ireland. This was the seat of the High King and is also said to be the burial site of goddess Eriú, who gave her name to the island.

The lighting of the fire on the Hill of Uisneach fire was the signal for igniting fires on many hills across the whole island creating a fire eye shape, with the Uisneach fire being the pupil. On Tuesday night many fires could be seen burning still across the island.

Clake told the RTE "This is possibly the oldest festival in Ireland, given that it's been going since Neolithic times. Over the past ten years, it has been revived and has evolved.

Check out the RTE video here:

Clake, a radiographer at the Midland Regional Hospital by day, explained that she and her family felt that the fires should still go ahead this year despite COVID-19.

He told RTE "We’re lighting the fire this year as a symbol of hope and to show that In these trying times there is still light going forwards.

"I come up here most days after work and it’s a really special place. I wouldn’t want to miss this."

Clake continued "It’s very symbolic. This is bringing the darkness into light.

Read more: The eight sacred Celtic holidays of the year