The float was to feature in the St. Patrick's Day 'Wearin' of the Green' parade, Baton Rouge's biggest parade of the year. 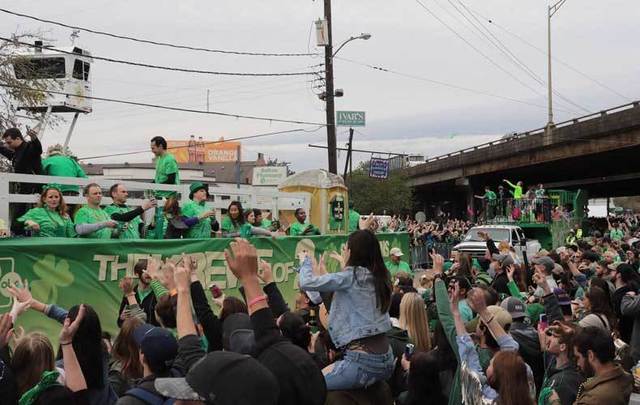 The float was to feature in the Wearin' of the Green parade, the city’s biggest parade of the year.

Edwin Edwards, the owner of Ivar’s Sports Bar & Grill, went to pick up the decked-out, 40-foot steel float from storage last week and found it was gone.

Read More: What you should know about annual St. Patrick’s Day celebrations around the world

"We were picking it up to go do some maintenance on it and when we went over there, it was nowhere to be found,” Edwards told WBRZ.

The float was stored in the back parking lot of a truck stop in Livingston Parish.

The property owner at the truck stop said it was still parked there about two and a half weeks ago.

"He just thought we came to pick it up to start the parade,” Edwards said.

"My initial reaction was that my mother is going to be very mad. She's part-owner of the float with me and enjoys St. Patrick's Day just as much as I do."

Edwards, who has had the float for over a decade, said: “It has been there a while like it is every year. Someone might have just thought it was abandoned and figured they would borrow it.

"It was more of like if it was a mistake drop a pin or drop it off where you last found it. No harm no foul and we'll go on from there.”

Edwards has posted to social media asking for help in tracking down the float. If anyone has information leading to the recovery of the vehicle, Edwards is offering that person a free ride on the parade float, throws, and passes to the parade after-party.

If the float is not found, Edwards and the parade crew plan to start over.

"We'll have to take the steps to rent a float for the parade because we're obviously not gonna miss the St. Patrick's Day parade,” Edwards said.

The 35th annual Wearin’ of the Green Parade takes place on March 14 at 10am.