Two families are heading to Inis Meáin on the Aran Islands this September where they'll live rent-free for the school year after winning a competition launched by Comhlacht Forbartha Inis Meáin. 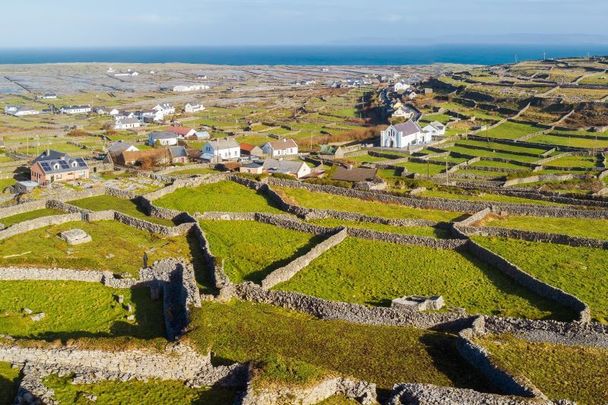 Two Irish families, one from Co Meath and the other from Co Limerick, have been selected from more than 1,600 applicants to live rent-free for a year on Inis Meáin on the Aran Islands.

Comhlacht Forbartha Inis Meáin, a community development organization on the Irish island, launched the unique initiative earlier this summer with the aim to bolster numbers in the small community. Inis Meáin, which is largely Irish speaking, has a population of roughly 200 people.

Families with school-age children were invited to apply to live rent-free on Inis Meáin from this September for the academic year. The winning families will have access to the community's schools as well as a brand new remote working hub.

Of the 1,600 who applied, 20 families were shortlisted and asked to submit a video application, the Irish Times reports. That group was whittled down to four who took part in an interview on August 19.

On Monday, the lucky winners were selected - Rónán and Colette Mac an tSaoir and their five children from Navan, Co Meath, and Valerie and Conor Sheehy and their four children from Curraghchase, Co Limerick.

While being fluent in Irish was not a requirement to be in the running for the competition, both of the winning families had been making an effort to learn and preserve the Irish language.

“It’s something we’ve dreamed of for years, just to find a place in the Gaeltacht and couldn’t believe it when we saw the advertisement,” Rónán Mac An tSaoir told GalwayBay FM.

“It’s the chance of a lifetime,” he said.

Valerie Sheehy said the excitement has already begun to build with her children: "Exploring the island, getting lost amongst the stone walls, and running out into fields - they love outdoors. So just the feel of the life we feel we’re going to have it’s just very exciting and the kids are extremely excited about it.”

Mairéad Ní Fhátharta, chairwoman of Comhlacht Forbartha Inis Meáin, told the Irish Times that they were “very proud” of their initiative regarding the provision of a house rent-free for the academic year.

The group, which was founded in 2016, describes itself as a community development organization that helps promote the island, ensure services, preserve the language, attract funding, and help ensure a better life for the community of Inis Meáin.

Ní Fhátharta said "it is especially heartening that so many people entered the competition."

She added: “It generates hope for the Gaeltacht areas that so many people expressed such an interest in the Irish language and in living in a rural area.”