Ann Lovett’s former boyfriend Ricky McDonnell speaks publicly for the first time about their relationship, her death, and why he thinks to went to the grotto when she knew she was giving birth. 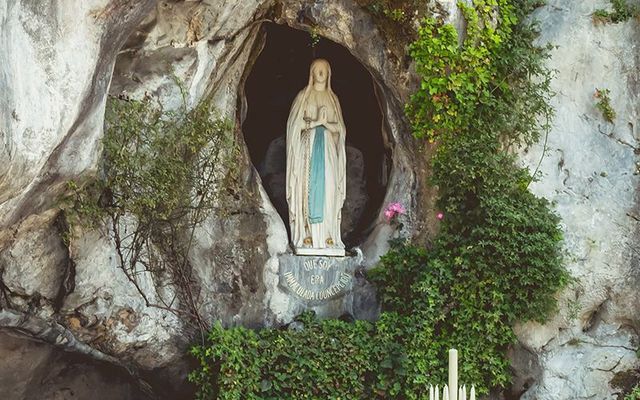 A Catholic grotto to Virgin Mary, similar to the one Ann Lovett died beneath alone and shamed in childbirth. iStock

Ann Lovett, aged 15, was found dead beneath a statue of the Virgin Mary. She had died in childbirth.

The former boyfriend of Ann Lovett, the 15-year-old Irish schoolgirl who died in childbirth in a church grotto in Granard, Co. Longford, in 1984, has spoken out for the first time about their relationship and her death.

Ricky McDonnell was 15 when he first met Lovett, who was then 13 years old. The pair struck up a relationship shortly afterward and it became a sexual relationship not long after her 14th birthday. By the time of her death on January 31, 1984, the pair were no longer together, having drifted apart some months before but McDonnell told the Irish Times that he believed they would end up together again at some point.

“I was bowled over. Absolutely bowled over,” he told Rosita Boland of the first time he met Lovett.

“I thought she was funny, she was nice looking, she was friendly. I think she liked me immediately as well. It was like love at first sight.

This is the biggest story I’ve ever worked on. I know my inspirational first features editor, the late Caroline Walsh, is proud somewhere today. #annlovett #rickymcdonnell #truth I was Ann Lovett’s boyfriend
via @IrishTimeshttps://t.co/KRx02LVM5X

“There was a pub down the town, Phil Smith’s, which had a pool table in a backroom, and there was the pool hall next door. They had a pool table and a jukebox and a pinball machine. There was a chip shop in the middle of the town. So we would just hang around there. That’s where all the young people would hang around,” he continued.

“At the beginning, we used to meet at the pool hall or the chipper and we’d hang around there smoking fags and having the craic, messing about. And then I’d usually walk her home. It could be 10.30pm or 11pm. It didn’t seem to bother Ann that she stayed out late. I never seen her parents come out looking for her.”

McDonell describes Lovett as “intelligent” as well as “loving and caring and kind.”

“Ann was always messing about, always having the craic,” he said.

“She was very sharp, very witty. She could hold her own, she could stand up for herself, about what she thought; she was able to back it up. She was brilliant at drawing. She was intelligent. She was also loving and caring and kind. I could just go on and on, the things to say about her. She was fun to be with; a fun person to be in the company of.”

At the time, McDonnell was living alone, his father recently deceased and his mother living in England. As their relationship intensified after her 14th birthday, Lovett began to stay at his home several times a week.

“It started to get serious after that,” McDonnell said.

Finally, a photo of Ann Lovett ‘a strong kick ass girl’. She looks like so many of my friends from the 1980s; she looks like me. She could have been any Irish girl of that generation. Now I can see her strength. Thanks @RositaBoland and @IrishTimes pic.twitter.com/zTJX6WnrtV

“She started to come to the house more often and stay later and later as the relationship intensified. It got to the point she was staying with me four or five nights of the week, every week, sometimes going home at 4am or 7am, and I would say virtually everybody in Granard knew that at the time.”

One evening, however, McDonnell tells of how Lovett arrived at his house distressed with bruises on her thighs. He asked whether she had been raped but she would only ask him not to tell anybody. After this, their relationship began to grow apart but McDonnell heard rumors that she was pregnant and asked her several times if she was, offering to stay with her if it were true.

► VIDEO: The story of Ann Lovett, the schoolgirl who died aged 15 after giving birth at a grotto in Granard, Co Longford in 1984 https://t.co/pcMxEr5y9d pic.twitter.com/jtAOL6bkwl

“I was standing in the doorway of Paddy O’Hara’s pub with a group of lads, and Ann was coming from the shops, and she walked past us and said hello to everybody and as she walked away, one of the lads said, ‘She doesn’t look pregnant to me,’” he explained.

“And that’s when the penny dropped for me. That was the first I had heard of it. Or even suspected that anybody had rumors or anything about her.

“She denied it. That was the way it was for any other kind of meeting that we had. I’d broach the subject and she’d laugh it off, or she’d say, she’d just put on a bit of weight, and she was embarrassed.”

McDonnell believes that Lovett went to the grotto out of protest and knew exactly what she was doing, bringing a pair of scissors with her when she left her house to go to school that morning.

34 years ago today, Ann Lovett died after giving birth at a grotto in Granard. Ann’s death changed an Ireland which is still trying to escape the long shadow of the 1980s, writes @Donal_OKeeffe. https://t.co/dwFATxiG0L via @TheAvondhu pic.twitter.com/51cEuy2Num

“It was obvious what she was going to do. She went up to the Palms, to the grotto, to have that baby,” he said.

“So to me, this was a protest, on her behalf. That’s what I feel. I don’t believe any other thing. Ann just wasn’t like that. She could have got help anywhere, and she would have got plenty of help. This is well out of her character to do this. In the letter, she said she was sorry for what she was going to do. None of it adds up. I knew Ann better than anybody. And no way would she have gone to the Palms on her own, to have a baby, because she could have asked anybody for help, anybody, and they would have helped her. It’s just unbelievable.”