“If the goats in the wild knew how well they’d be treated at the Puck Fair they’d be queuing up,” says Healy-Rae. 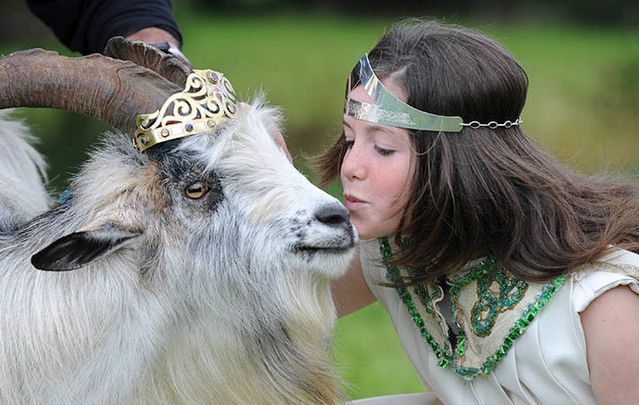 In advance of the annual, ancient, three-day festival of Puck Fair, in Killorglin, County Kerry, animal rights activists staged an impromptu demonstration to protest the treatment of King Puck himself, a wild goat who is at the center of this weekend’s celebrations.

One of Ireland’s oldest festivals, Puck Fair’s believed to date back to 1613. Every year a goat is caught in the mountains and brought back to the town of Killorglin where the Queen of Puck, traditionally a young school girl, crowns the him “King Puck.” Yesterday, Aug 10, King Puck was paraded through the streets before being crowned and elevated onto a high platform in the town square, which will act as the center of the festival for three days. On the third day the goat is brought down and released into the wild.

The group says that while they don’t disagree to holding the ancient fair in the town they are against hoisting the goat onto the high platform for the weekend.

Local, Independent, politician Michael Healy-Rae told Agriland that while anyone has the right to peacefully protest he does not agree with their views.

Healy-Rae said, on the contrary “If the goats in the wild knew how well they’d be treated at the Puck Fair they’d be queuing up.”

He added “They’re saying that there’s something wrong with the way the goat is treated.”

The politician pointed out that the animal’s welfare is a priority to the Puck Fair organizers and a vet examines the animal thoroughly. He said the animals were fed well, and in fact put on weight, and were treated very well.

“Last year when they released the goat, it walked a short distance and was looking back, almost sadly, at the handlers” Healy-Rae said.

In a statement released in advance of their protest ARAN urged “organizers to leave the confused and terrified animal out of what is essentially a noisy and unnatural situation for him.”

Spokesperson John Carmody said “We are delighted the Puck Fair is still taking place but saddened that a real animal must remain as part of this tradition.

“People’s opinions on using animals for entertainment is changing fast in this day and age, and to that end, we urge the organizers to commit to taking the live animal out and replacing him with something more artistic and humane that reflects the spirit and beauty of the animal, that way everyone can have fun in what is otherwise a brilliant event.”

ARAN have voiced their concerns about the welfare of the wild-caught goat to authorities in the past. In their recent statement they objected to the animal being “paraded through the packed streets of Killorglin and then hoisted roughly 60 feet into the air for a couple of days in varying weather conditions, where he is then confined to a tiny cage, terrified and confused amongst thousands of party-goers and drunken revellers.”

They added that “no veterinary inspections will ease the psychological problems this animal will endure and we feel that part of the Five Freedoms in the Animal Health and Welfare Act may be violated.”

On Thursday morning the Chair of Puck Fair, Declan Mangan, told Newstalk, that the animal is well looked after and strict protocols are abided by. He explained that the stages at the festival have been designed with the goat’s welfare in mind and speakers are angled away from his cage.

Mangan said “Each day, he’s taken down and walked around. He’s fed and watered.

"His bedding is changed to make sure he’s comfortable."

King Puck is examined by a vet from the Department of Agriculture every day.

When speaking about the caging of the goat, and elevation on the platform he said “We think it’s a tradition that’s unique to the town of Killorglin…I think it’d be very remiss of our generation to throw away such a unique tradition."

Here’s some footage of the fair dating back to 1967: