An Post's new Pride stamps - one which reads Pride and the other which reads Bród - will benefit Irish LGBT+ charities. 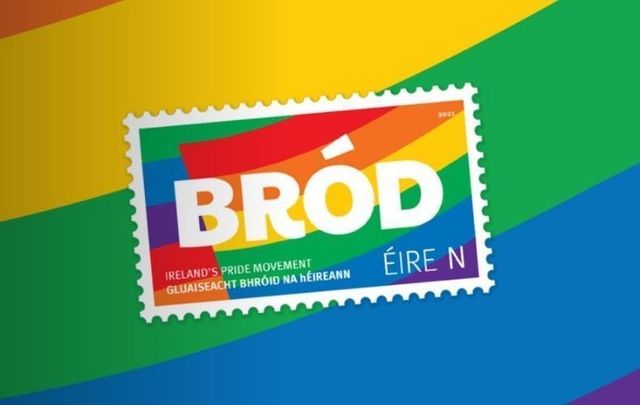 An Post says it worked closely with representatives of the LGBT+ community in planning for the stamps which were designed by Dublin company, Unthink, and unveiled today, June 10.

“We are delighted to join with our staff and customers in celebrating Bród and the Irish Pride Movement," David McRedmond, CEO of An Post, said upon today's launch.

“An Post worked closely with LGBT+ representatives in planning these colourful and symbolic new stamps which mean so much to Irish people at home and across the world.

“Two hard-working national LGBT support groups, BeLonG To and LGBT Ireland, will benefit from the sale of the stamps, in line with An Post’s purpose to work for the common good and to improve the quality of life now and for the generations to come”, McRedmond added.

Taoiseach Micheal Martin and LGBT activist Panti Bliss (aka Dr. Rory O'Neill) celebrated the launch of the stamps on Thursday:

Delighted to help launch An Post's special Pride stamp (which will support @LGBT_ie and @BeLonG_To) with the Taoiseach and I also took the opportunity to raise the asylum case of Mr X with him, and he said he would look into it, for which I'm grateful.https://t.co/AEJsiKqtmI https://t.co/p4M0akHMJB

The new stamps are available from main post offices in Ireland and online here in a special booklet format (6.40), each containing a mix of four ‘N’ rate Pride and Bród stamps for posting across the island of Ireland and one ‘W’ rate stamp for posting letters worldwide.

An Post is expecting strong demand for the stamps in Ireland and globally as images of the Pride flag flying over the GPO has featured heavily on social media across the world. Pride lapel pins, t-shirts, and framed stamps are also available for purchase online.

An Post has also shared this video, The Road to Bród, which looks at the history of Pride in Ireland:

The Pride flag was originally designed by American artist and activist Gilbert Baker in 1978 to represent the diverse LGBT community.