Ali Charaf Damache is appealing the decision to revoke his Irish citizenship made by Minister for Justice Charles Flanagan. 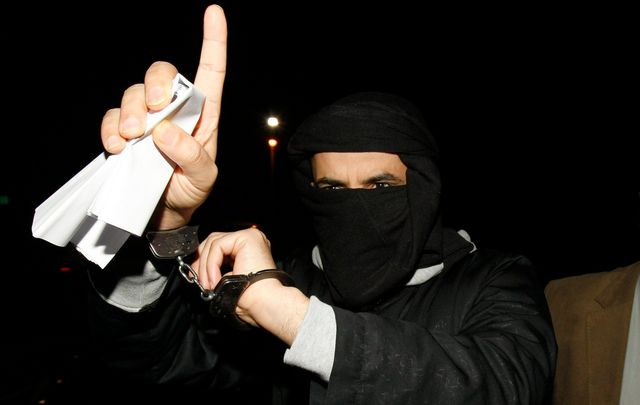 Ali Charafe Damache (L) of Algeria arrives with Irish Police to the Waterford District Court in Waterford, Ireland on March 15, 2010, after being charged. Damache was one of two men in custody in connection with an alleged plot to murder cartoonist Lars Vilks over a picture of the Prophet Mohammed with the body of a dog. PETER MUHLEY/AFP/GETTY IMAGES

Ali Charaf Damache is appealing the decision to revoke his Irish citizenship made by Minister for Justice Charles Flanagan.

A jihadist has taken his battle to retain his Irish citizenship to the High Court, citing that it would be ‘unfair’ if he was to lose it.

Algerian-born Ali Charaf Damache came to Ireland in 2000 and married an Irish woman in 2008, granting him rights to Irish citizenship. He is currently in the midst of serving a 15-year prison sentence in the US for providing material support to Islamic terrorists.

Damache, who moved to Waterford from Algeria, has been linked to numerous terror cells in the last decade. He became involved with al-Qaida shortly after gaining Irish citizenship and has since been involved with a jihadist terror cell which plotted terrorist attacks in Europe and Asia.

He also conspired with Colleen LaRose, an American woman known as Jihad Jane, in an attempt to murder Lars Vilks, after the Swedish cartoonist depicted the Prophet Muhammad as a dog.

The Irish government refused to extradite Damache, but he was later arrested in Barcelona in 2017 and handed over to the US authorities.

Read more: Irish-Algerian jihadist sentenced to 15 years in US prison on terror charges

His indictment read that Damache “knowingly and willingly conspired with others to wage a violent jihad overseas, actively supporting the very ideals that allow terrorism to thrive worldwide.”

The indictment also stated that Damache, along with LaRose and another jihadist Mohammed Hassan Khalid, “recruited men online to wage jihad in South Asia and Europe and recruited women who had passports and the ability to travel to and around Europe in support of violent Jihad.”

Last October, Irish Justice Minister Charles Flanagan stated that he intended to revoke Damache's citizenship due to his failed duty of loyalty and fidelity to the Irish State, something that Damache is currently fighting in the Irish judicial system.

The terms of Damache’s guilty plea dictate that he will be deported to Ireland or Algeria upon the completion of his prison sentence, meaning that if he does lose his Irish citizenship he faces going back to Algeria. Damache claims that his safety would be jeopardized and that he would be mistreated if he is forced to return to Algeria.

His counsel, Sunniva McDonagh, argued that section 19 of the Irish Nationality and Citizenship act – which allows the Justice Minister to revoke citizenship in special circumstances, including a lack of loyalty and fidelity to Ireland – was repugnant to the Irish constitution.

Justice Richard Humphrey said in the High Court that he would reserve judgment on Damache's case until a later date.

What do you think, should Damache retain the right to Irish citizenship? Let us know in the comments.