A 40-year-old British man was shocked to discover that his birth father was legendary Irish-American boxing commentator Bob Sheridan. 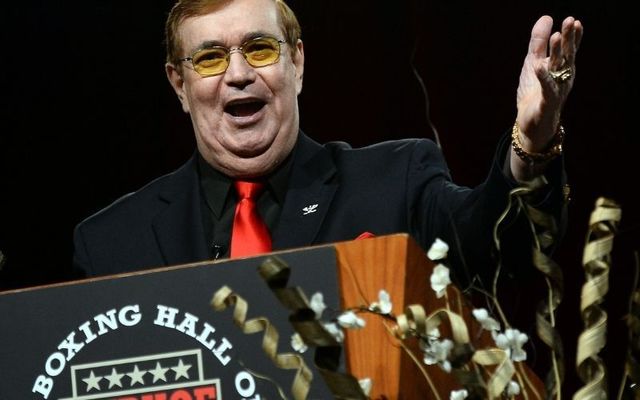 Legendary boxing commentator Bob Sheridan has commentated on more than 10,000 fights in his glittering career. Getty

A 40-year-old British man who was adopted as a baby has learned that his long-lost dad is legendary Irish-American sports commentator Bob Sheridan.

Simon Edwards, a cost controller who also works as a stewart for semi-professional soccer club Hitchin Town FC, lives with his adoptive parents in Hertfordshire and discovered his long-lost father through distant birth relatives in County Galway.

Edwards and Sheridan are now regularly in contact with each other and Sheridan is flying his long-lost son out to Las Vegas first-class this summer to celebrate Sheridan's birthday on June 22.

"We've been talking on the phone every day and I'm thinking this kid is more like me than I am. Here's a baby boy that I can go and get hammered with," Sheridan said on Friday.

The legendary boxing commentator, who has commentated on more than 10,000 fights and celebrates a link to Ireland through his Irish parents, said that he discovered that he had a long-lost son on the day of his wife's funeral in December 2020.

"Losing my wife Annie is the worst thing that ever happened in my life," Sheridan, 76, told Fightnews.com.

"About 30 people came back to my house where I had a pint of Guinness and I calmed down and then I got a call from people high up in the government and they told me without question that I had a 41-year-old son named Simon Edwards, and soon to be Simon Edwards Patrick Sheridan.

"It is an inspiration in life for me. They took away my wife and the same day they gave me my long-lost son."

Meanwhile, Edwards discovered that his birth mother Rosemary was from County Clare and died in 1985.

He said said that she met Sheridan while working in a "fancy" hotel in Clare while the sports commentator was holidaying in Ireland.

"They obviously hit it off," Edwards told the Comet. "Being unmarried and from a Catholic family in those days, she put me up for adoption."

Edwards was born in Newham, East London, in 1980, and his mother Rosemary gave him to a Catholic adoption agency in Britain. He was later adopted by British Aerospace scientist Mike Edwards and his wife Sue, a healthcare worker.

Edwards said that his adoptive parents were "over the moon" when he tracked down his birth father.

"They've always said if I wanted to find them they would be behind me," he said.

Sheridan said that he has learned that Edwards is "a terrific kid" and added that he is looking forward to celebrating his birthday with him in June.

"This is a terrific kid who is a practising Catholic and is also a star athlete. He has all his own money and he doesn't need you for money, he just wants to meet his father," Sheridan told Fightnews.com.

"I am flying him to Las Vegas on my birthday in June... everyone in my family is excited... we will have my party and Simon's coming home party."

However, Sheridan dismissed rumors that Edwards is now in line for a $200 million fortune, claiming that he "spent it on booze and women".

"And the rest? Oh, I suppose I just blew it," he told the Daily Mail.

The 76-year-old commentator currently lives in a rented house in the Las Vegas suburbs having filed for bankruptcy in 2014.