An elderly Irish woman has raised thousands for charity by holding a dance celebration on her 90th birthday. 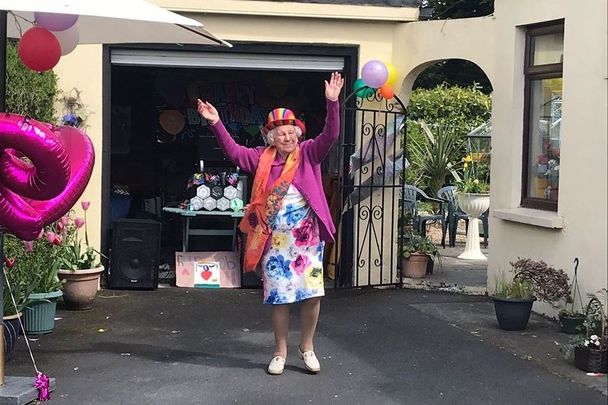 Kathleen Lynch has raised thousands for charity with a dance-a-thon in celebration of her 90th birthday. Kathleen Lynch/GoFundMe

An elderly Irish woman has raised thousands for charity by holding a dance celebration on her 90th birthday.

Lynch’s family had initially planned a hotel party to mark the momentous occasion, but the event had to be canceled due to the COVID-19 pandemic, according to RTÉ.

Not to be deterred, the great-grandmother thought she would have a one-woman, 90-minute dance party in her back yard starting at midday on her May 1st birthday, reaching a crescendo at 3:09 to make the exact time she was born in 1930.

Lynch, who has been staying at home with her 94-year-old husband Donnie, then decided to ask the rest of Ireland to join her for a one-minute dance at the exact time of her birth and set up a GoFundMe page to raise funds for the two charities.

She chose the Irish Red Cross and Age Action, which set up a hardship fund in March to help the elderly experiencing added financial stress due to the coronavirus crisis. The huge number of applications has overwhelmed the fund, so Lynch’s fundraising efforts are especially welcome, according to BreakingNews.ie.

That's a wrap folks! Kathleen has surpassed all expectations and completed over her 90 minutes dancing throughout the day. Massive thanks to all who participated online and in the local community dancing with Kathleen (while adhering to social distancing guidelines) and for all the generous donations. It was a very special day that will live long in all our memories. Keep smiling & keep dancing Le grà Kathleen

According to Lynch’s daughter Geraldine, her mother was “completely humbled” by the outpouring of support.

“How it all started was that she said she didn’t want anything for her birthday because of the situation in Ireland at the minute and then she said if we wanted to do something would we give money to a charity that needed it at this time,” said Geraldine.

“So she chose the two charities because they were dealing with the fund for older people.”

Red Cross paramedics, gardaí, and even a couple of nuns stopped by Lynch’s home to lend their support over the course of the afternoon, The Irish Times reports. Some of Lynch’s local family and friends were also in attendance ( while observing social distancing restrictions).

"I just want to lift the spirits of anyone and everyone during these gloomy days," said Lynch.