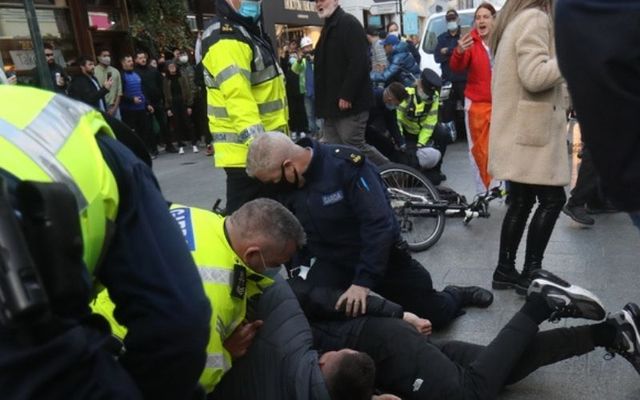 Gardaí arrested 11 people after an anti-lockdown protest in Dublin turned violent on Thursday.

Demonstrators gathered on O'Connell Street and marched to Grafton Street to protest against the Irish Government's latest COVID-19 restrictions, which shuttered non-essential retail and confined people to within 5km of their own home.

Gardaí said that a small group of demonstrators became involved in "public order offenses" when the protest broke up at around 5:30 p.m. on Thursday evening, resulting in the arrests.

There was a significant Garda presence at Thursday's protest. with members of the Public Order Unit in attendance, and the Irish Mirror reports that there were violent clashes as gardaí tried to arrest several protesters.

Despite the clashes, gardaí said that no injuries were reported during the arrests and that most protesters dispersed "without serious incident".

The 11 arrested protesters were promptly taken to Garda stations across Dublin as gardaí launched an investigation into the organization of the protest.

Gardaí will also seek advice from the Director of Public Prosecutions on what action it should take regarding the protests, which breached Ireland's new COVID-19 restrictions at the very least.

Meanwhile, a man was also arrested yesterday for his part in an assault during an anti-lockdown protest in September.

The man was arrested in Louth on Thursday evening on suspicion of assaulting LGBTQ activist Izzy Kamikaze during the protest on Sept. 12. He was detained in Pearse Street Garda Station in Dublin, where gardaí have been investigating the assault.

The assault left Kamikaze with a serious head wound and she required treatment in Tallaght Hospital.

BREAKING - A man has been arrested by gardai over the assault of activist and campaigner @IzzyKamikaze by far right thugs outside the Dail last month. More to follow @IrishSunOnline pic.twitter.com/oXbKgXu5VQ

She had attended the anti-lockdown protest with a small group of counter-protesters who marched in response to the far-right demonstrators, resulting in clashes outside the Dáil.

Footage of Kamikaze later surfaced online showing her with a serious head injury as gardaí tried to keep the two groups apart.