One Belfast couple recently discovered a message in a bottle on a beach in Co Donegal that had been dropped in the ocean off the coast of Maryland in the US in 2019. 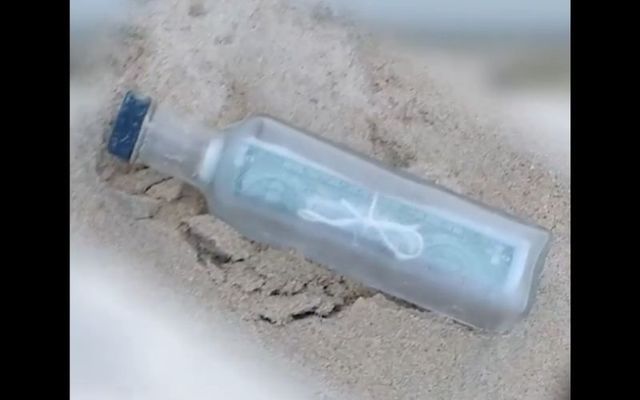 It took three years, but Sasha Yonyak's message in a bottle made it all the way from Ocean City, Maryland to a beach in Co Donegal. NBC Washington, YouTube

Belfast couple Ciaran Marron and Rita Simmonds have made a new friend halfway around the world after discovering a message in a bottle on a beach in Co Donegal this month.

The couple stumbled upon a glass bottle which, upon closer examination, had American dollar bills and a handwritten message in it.

“We knew, anyway, we had a message in a bottle, so we got really excited,” Marron recently told NBC Washington.

MESSAGE IN A BOTTLE: How cool is this?! Three years ago, Sasha Yonyak of Ocean City, MD threw a note in a bottle in the Atlantic. It went all the way to Ireland, where a couple found it on a beach! Ahead, we'll hear from both families about the incredible find @nbcwashington pic.twitter.com/LRcvfKP3g3

After letting the note dry out by the fire at home, Marron and Simmonds learned that the message in a bottle had been dropped into the ocean off the coast of Ocean City, Maryland in the US in 2019 by then 11-year-old Sasha Yonyak and his neighbor Wayne Smith, affectionately known to Sasha as “Mr. Wayne.”

The note inside the well-traveled bottle described Sasha’s hobbies, friends, and family, and also included a phone number with a request for the finder to call Sasha. However, the phone number had since been disconnected at some point during the bottle’s long journey.

Marron and Simmonds, however, were able to track down Sasha’s dad Vlad on Facebook, which became the start of a new transatlantic friendship.

“It was so cool to hear that the bottle made it all the way to Ireland,” Sasha’s father Vlad Yonyak told NBC.

The Yonyaks told local Ocean City publication The Dispatch that Sasha used to enjoy going on fishing trips with his neighbor Wayne Smith, who sadly passed away last August before their treasure washed ashore all the way in Ireland.

As it happens, Sasha and Wayne had discovered their own message in a bottle one day at the local marina with a note that said to "pass it on." That message, however, had originated there in Ocean City, and Sasha and Mr. Wayne were determined to send their bottle a bit further.

“We went one mile offshore, off Ocean City, Maryland, and we threw it in, and it just started sailing," Sasha told NBC.

“We talked about how it might go into the Gulf Stream but we didn’t know where it’d end up because of the currents,” Sasha said, who now admits that he had forgotten all about the message in the bottle until he heard from Marron and Simmonds.

“All our friends and family want to know the kid who threw the bottle in the ocean,” Simmonds now says. “He’s already a celebrity here.”

“It’s a once-in-a-lifetime thing,” Marron said. “It’s something you sort of dream of as a kid, you know, to find this bottle and take you on some magical trip.”

Simmonds added: “One day hopefully we can meet him in Donegal and show him the beach it landed on.”

You can watch NBC Washington's report on Sasha Yonyak's message in a bottle here: