Trump’s ratings plunge to new low as base deserts him

White voters without a college degree are turning against the President, according to the latest poll from Quinnipiac University. 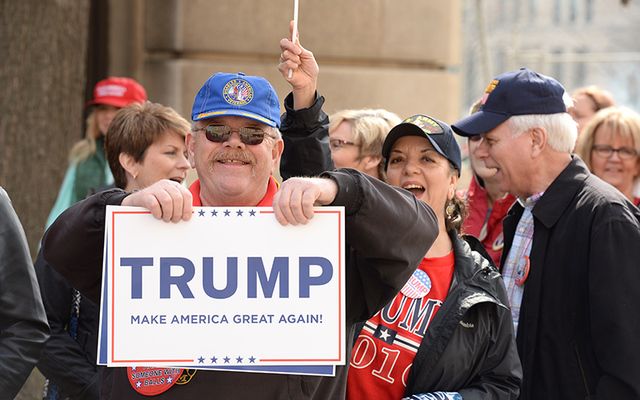 A President Trump supporter before the November 2016 election. According to a new poll, Trump's ratings are plummeting as his base leaves him. iStock

A new poll from Quinnipiac University revealed today that President Donald Trump has reached an all-time low with the American public as his approval ratings plummet.

With close to a 2-1 disapproval rating, Trump appears to be losing one of his largest bases - white voters with no college degree - who now disapprove of the job he’s doing 50 - 43 percent. White men are divided 47 - 48 percent and Republicans approve 76 - 17 percent, according to the latest poll.

Today’s overall approval rating is down from a 55 - 40 percent disapproval in a June 29 survey by the independent Quinnipiac (KWIN-uh-pe-ack) University. This is President Trump's lowest approval and highest disapproval number since he was inaugurated on January 20, 2017.

American voters say 54 - 26 percent that they are embarrassed rather than proud to have Trump as president as well as 57 - 40 percent believing he is abusing the powers of his office and 60 - 36 percent saying that he believes he is above the law.

It was not all bad news for the 45th US President, however, as a majority still believe he is a strong person, and that he is intelligent, according to the poll.

"It's hard to pick what is the most alarming number in the troubling trail of new lows for President Donald Trump," said Tim Malloy, assistant director of the Quinnipiac University Poll.

"Profound embarrassment over his performance in office and deepening concern over his level-headedness have to raise the biggest red flags.

"The daily drip drip of missteps and firings and discord are generating a tidal wave of bad polling numbers.

"Is there a wall big enough to hold it back?"

He also beat out John McCain for his approval rating among Republicans, the Arizona Senator receiving a negative 39 - 49 percent rating from them but a 57 - 32 percent favorability rating overall, a 74 - 18 percent positive score from Democrats, and a 60 - 28 percent positive rating from independent voters.

The President may have a massive Twitter following but the poll showed that voters wish he’d give up the social media forum. American voters say 69 - 27 percent that he should leave his Twitter handle aside, the biggest no-tweet vote so far.