Give someone the perfect gift of a Paddy Pal for St. Paddy’s day

Looking for a St. Patrick's Day gift or trying to create a special memory of the day? These Irish teddy bears make for treasured friends and companions. Each of them comes with a different backstory and Irish talent, from farming to poetry to Irish dancing, but they all have one thing in common, they love St Patrick's day.

Paddy Pals is a County Down-based company supplying authentic Irish teddy bears. The legend of the Paddy Pals states that they are the last of the wild Irish Teddy Bears who live deep in the Mountains of Mourne:

Deep in the Mourne Mountains in County Down, St. Patricks day is as big as Christmas day. The bears take the day off from their daily chores and sing, dance, and party all day long and into the night. They are hoping that St. Patrick will turn the stone and that the long winter will be finally over and spring will arrive. This is the time when Lizzie the Irish dancer and Logan the Irish Piper come into their own and lead the rest of the bears in their St. Patrick’s Day festival of song and dance!

If you're wondering which of the Paddy Pals is the perfect gift or Irish addition to your teddy bear collection, it's important to know that each of the bears has their own unique personality and backstory.

Here's everything you need to know about the Paddy Pals. 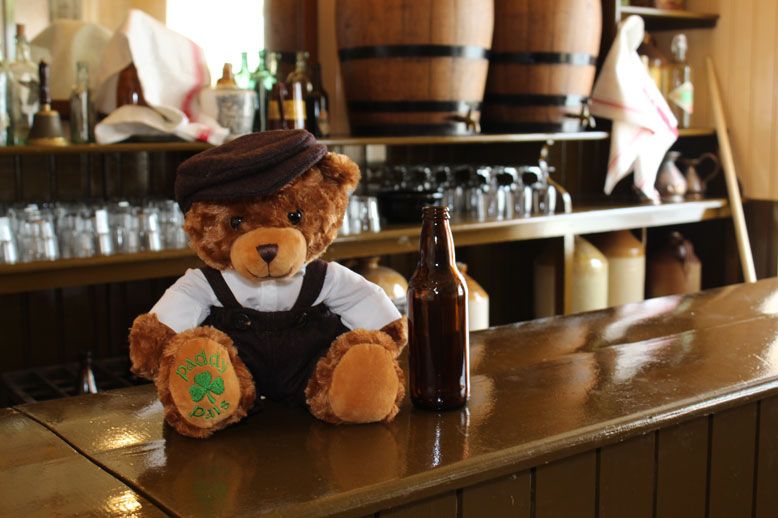 Páraic is up from the crack of dawn, hard at work on his family’s farm in the Mournes, sowing crops, delivering calves, milking the cows and tending to the bee hives. Bears couldn't do without their honey! It's a tough old job sometimes and the Irish weather doesn't help.

But he loves working the land, and it's up to Páraic to bring in the harvest and feed the rest of the bears no matter how bad the weather. He may be a cute Teddy Bear, but he can hold his own with the best of them, and his farm is the best in Ireland. 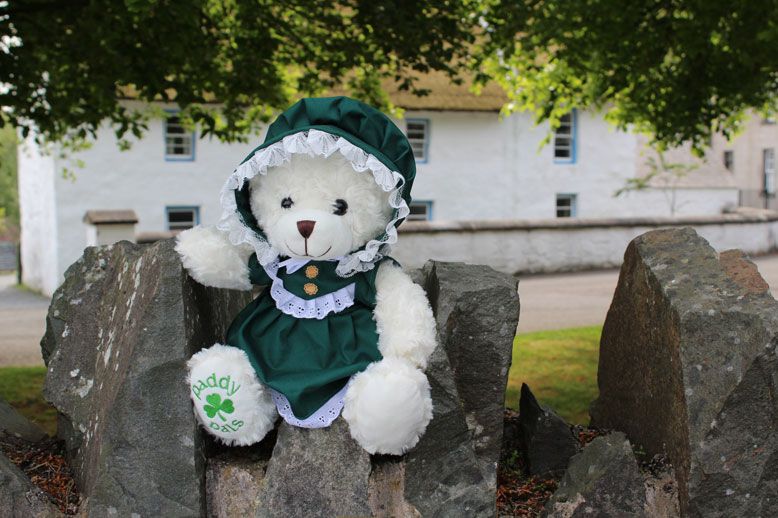 There's none quite as fair as an Irish Colleen and if you win her heart, then she'll be your queen. At birth, Róisín was blessed with a beauty beyond compare and she has many suitors all vying for her love. Her name means Little Rose, a flower that represents love.

Róisín has a feisty side too - some might say thorny - but underneath, she’s a soft, cuddly teddy bear. She’s also very talented and she loves to accompany Logan the piper on her bodhran drum. And just like the lyrics of the old song Róisín Dubh, pick her and she'll glad your heart and give you hope, too. 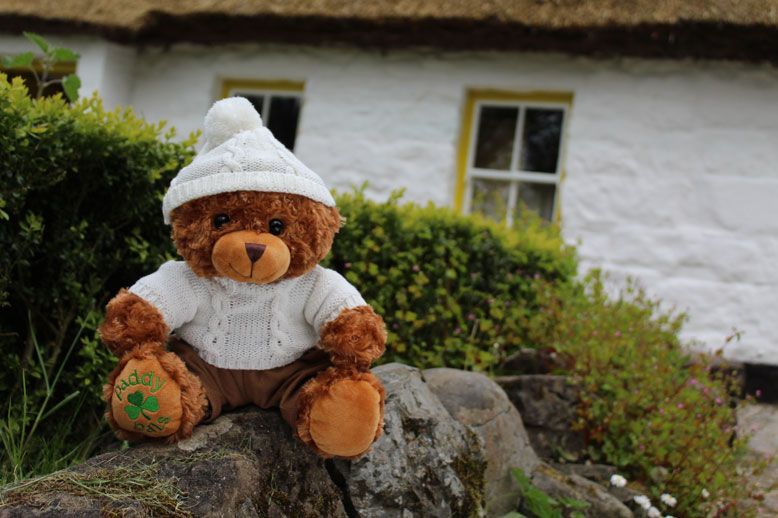 Finn has been fishing since he was a lad. As his name might suggest, he’s at one with the sea. Growing up in a small coastal village located in the shadow of the Mournes, he spent many happy hours on a trawler with his father, watching him at work, as he netted herrings and prawns. 'All good things come to those who bait', he would say.

Now Finn has his own boat and he catches fish for himself and all the other bears. Finn thinks there's no better feeling than being out on the water and reeling in a great catch. Fishing isn't just a job for him, it's a way of life. 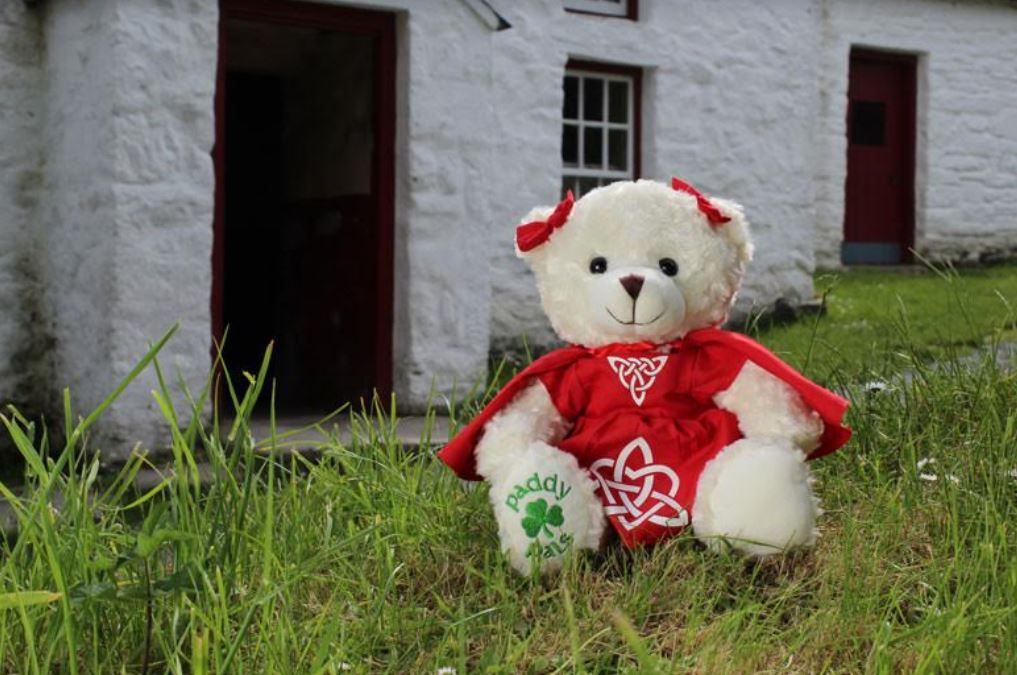 Lizzie is a dancer from the Mountains of Mourne. She kicks and she flicks, and she jigs and she reels. Dancing is an important part of Irish culture but it's great craic as well and it helps keep bears fit. Lizzie has entered many's a feis and she’s won plenty of medals but she says the best of all is dancing with her bear pals.

Their dances must be done with precision and perfectly timed with the music. And their costumes and wigs must be flawless as well. When Lizzie dances, she has two sets of shoes - soft for high jumps and leaps and hard for dances that require shuffles and clicks. 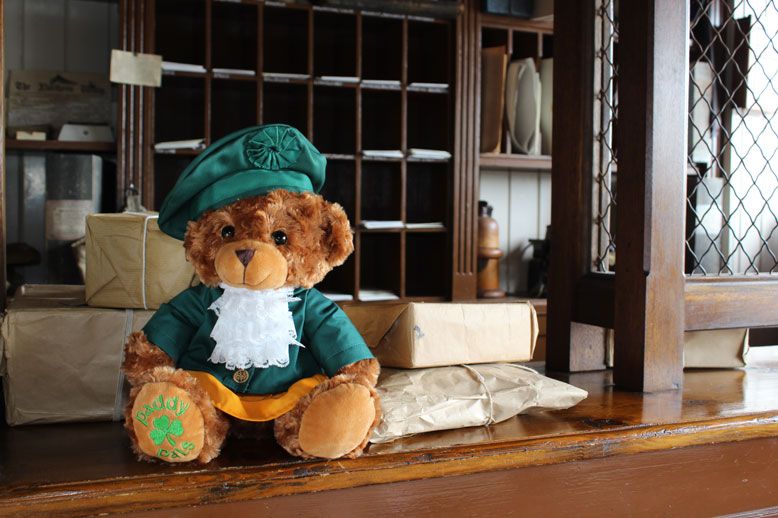 Ah, the pipes, the pipes are calling! There's no sound quite as sweet as that of the uilleann pipes, one of the world's most complex folk instruments. Logan’s forefathers played the pipes and passed this love on, generation to generation. Now he plays them too, often to mark some of life's great occasions. The sound is both beautiful and haunting and once heard, will live on in your memory.

Most evenings after a hard day's work all the bears gather together and Logan plays them a tune, Lizzie starts dancing, and they all join in. And if they've a tale to tell, they can do it through music and that's where the bagpipes of Ireland come in. 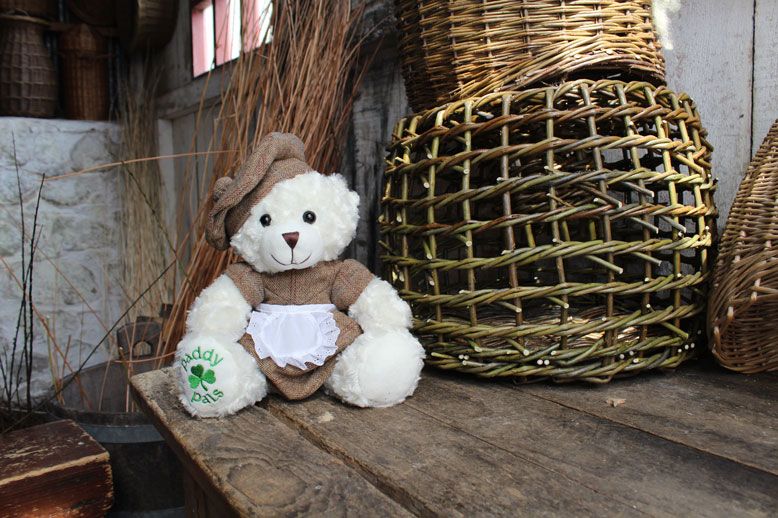 Molly, the basket weaver, makes beautiful baskets for collecting nuts and berries, all the things bears love. She has a special weaving shed where she makes all her baskets and wicker furniture for the village. She even makes wicker lobster pots for Finn and baskets for Páraic who uses them to hold seeds to sow his crops.

Molly loves to see all her Pals making use of all the baskets and furniture she has made for them. Her favorite baskets are her picnic baskets. They fill them up with berries and nuts, jars of honey from Páraic's bees and tasty fish from Finn. Then they all head off up the Mourne Mountain and look out over the sea and enjoy the views.

They say Ireland is a land of Saints and Scholars, but even if you didn't much like schooling, we all love a tall tale, and Paddy Pals are good at telling one. Whether it's a good old-fashioned ballad or a melancholy tale of unrequited love, James will tell you a tale with prose and poise and scribe the story whether the bears are digging or jigging.

There's often no rhyme nor reason in a poem but as far as James is concerned there is no better way to express feelings and to stir imaginations and emotions. So, James will continue his sonnets as he rambles in brambles looking for inspiration for his next poem.

Which of the Paddy Pals would you want to call your own? Learn more about them here.