New movie, directed by Rob Reiner, tackles the fate of the man destined to stand in the shadows of Kennedy’s Camelot. 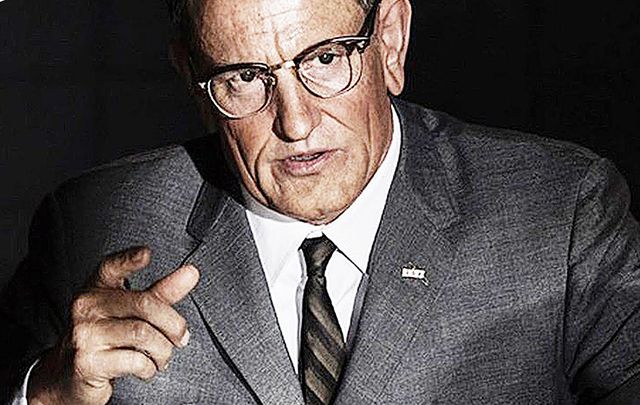 It was Lyndon B Johnson’s fate to stand in the shadow of Camelot. But now a new film is seeking to give him his due as the man who delivered great social and political advances like the Civil Rights and Voting Rights act.

In “LBJ” director Rob Reiner has cast Woody Harrelson as the famously jowly southern politician who became president after the assassination of John F. Kennedy, but was never JFK’s pick to become a successor.

“Oh, God, can you ever imagine what would happen to the country if Lyndon was president?” Jackie Kennedy, no fan of LBJ, claimed her husband used to say.

Faced with the escalating Vietnam War and civil unrest at home, the film begins after Johnson loses his Democratic presidential nomination bid in 1960 to the much younger Kennedy (Jeffrey Donovan) and instead agrees to become his running mate.

An almost unrecognizable Harrelson, buried under mounds of prosthetics, is physically transformed into one of the most canny and complex political leaders of the 20th century.

No sooner does LBJ accept the VP post but the Texas-born politician finds himself sidelined, despite his undeniable legislative expertise and finely tuned political instincts.

November 22, 1963, changes history though. On that day the still reeling nation watches as greatness is thrust upon LBJ with his wife Lady Bird (Jennifer Jason Leigh) standing by his side.

The inevitable show-down between Attorney General Bobby Kennedy (Michael Stahl-David) is seen in the new trailer, as both men grapple to ensure that JFK’s legacy is secured by championing the historic Civil Rights Act of 1964.

For years Jackie and Robert Kennedy were concerned that LBJ did not pirate JFK’s legacy, and they pushed to ensure that the world knew who the real author of this transformative legislation was.

But LBJ created a shining legacy of his own before dramatically quitting the national stage in 1969 and in Reiner’s new film he will finally get a hearing.

The film will be released nationwide on November 3.

Here’s a panel discussion on the movie which took place at The LBJ Library featuring Rob Reiner, Woody Harrelson, and Joey Hartstone: