John Connors, the Love/Hate actor whose first documentary series explored his own Irish Traveller roots, takes an unflinching look at racism faced by Black and Native communities in the US. 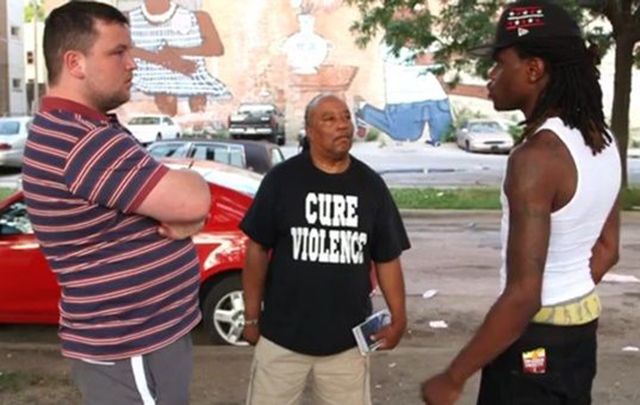 John Connors, the Love/Hate actor whose first documentary series explored his own Irish Traveller roots, takes an unflinching look at racism faced by Black and Native communities in the US. RTE 2

President Trump referred to the “carnage” in places like South Side Chicago in his inauguration speech. Now a young Irish Traveller and filmmaker has added his own unique perspective.

As a member of the Travelling community, Irish actor John Connors is no stranger to discrimination. As an actor, he played a gun-toting bomb-maker in the gritty Irish TV crime drama Love/Hate, yet neither of these experiences prepared him for the shocking reality of the black-white race divide in contemporary America.

In his new RTE 2 documentary Race Matters: John Connors’ America, the 27-year-old actor and social activist comes face-to-face with the violent consequences of racial divisions in Chicago, where he says it’s not uncommon for up to 40 people in the city’s African American neighborhoods to be victims of shootings in a single weekend.

After the success last year of his documentary, I Am Traveller, he went Stateside to explore issues of racism among two distinct groups, African Americans and Native Americans.

In the first episode, Connors visits African American communities in Dallas and other towns in Texas, before moving on to Chicago, Illinois, described by many as the most racist city in the States. He drives around the city with a ‘nightcrawler,’ a photojournalist who makes it his business to be at the scene of the crime as soon as it happens.

“There are likely to be 30 to 40 people shot over the weekend in Chicago,” says the nightcrawler, casually. “It’s part of our story.”

In the South Side, where Michelle Obama grew up, teenagers rap about broken homes, gangs, violence, money and drugs.

“I understand that this is your life, but by rapping about it, aren’t you also glamorising that world?” asks Connors.

He talks to kids with low expectations for their future, mothers running peace camps, a priest trying to lead people on a new path, and an Irish surgeon, John Barrett from Cork, who became a gunshot specialist and says racism is rampant in the city.

Connors knows what it’s like to grow up with discrimination, but even for him, the mean streets of Chicago were a stark eye-opener into just how bad things can get, especially in a country where the right to bear arms is written into the constitution.

“Nothing prepared me for the scale of violence in Chicago,” he says. “The big difference is we don’t have guns in Ireland. Up to 30 percent of kids in public schools in Chicago have witnessed a shooting. It’s the normality of the violence that shocked me, that and the segregation. There are parts of the city where African Americans have never seen a white person. Mothers won’t let their kids walk further than their own block. You just stay in your box.”

At one point, he looks to camera and says, “I’m a Traveller in the hood.”

But he doesn’t belong there.

“I felt like a well-to-do settled person might feel visiting a Traveller site in Ireland. I was perceived as a rich whitey with a camera, and I had to deal with that. Some residents have no concept of life outside the hood. One asked me, ‘Ireland – where’s that, North California?’”

If Connors’ experience in Chicago was a culture shock, his next mission is more a case of culture comfort. In the second episode of Race Matters, he visits a Native American reservation in Pine Ridge, South Dakota where, he says, “I felt at home.”

The visible similarities between Irish Travellers and Native Americans are clear: many members of both communities live in trailers, sit around campfires, and share a love of horses. But the parallels don’t end there. Both groups also suffer higher than average rates of unemployment, poverty, alcoholism and suicide. The rate of suicide among Irish Travellers is six times higher than average; among Native Americans it’s double the rest of the population. Their language is disappearing and their culture is under threat.

“My grandmother, Chrissie Ward, née Donohue, always had great sympathy for Native Americans,” says Connors. “When I was growing up, she taught me about the similarities between our people, and inspired me to follow in her footsteps as an activist. Lots of kids in Ireland liked to play Cowboys and Indians, but as Travellers, we always wanted to be the Indians. I identified with them as a child, and do so even more now.”

While President Trump steams ahead with construction of the wall on the border with Mexico, in South Dakota, activist Milo Yellowhair tells Connors about the invisible walls that keep his people of the Oglala Lakota Sioux tribe living in what he terms “dire conditions.” The government owns the land and its assets, and its Native American residents have no access to banks or mortgages, so cannot buy property or start a business.

“What does that say about America?” says Yellowhair. “We’re the greatest country in the world, but the first people to have owned this land are the most marginalized, the most downtrodden of any society in the US.”

Connors also listens to younger Native Americans who express their sense of discrimination and isolation through hip-hop and rap, and draws parallels with teenagers he mentors at home in Ireland. And he meets protestors against the Dakota Access oil pipeline, which runs below a lake providing drinking water to Native Americans in North Dakota.

In Washington, their protests appear to have fallen on deaf ears. President Trump has already signed an order to expedite completion of the pipeline, despite claims that it will put the water supply in jeopardy and destroy sacred land.

“Whether it’s African Americans, Native Americans or Irish Travellers, we may have different history, culture, and traditions, but the results of the systemic, institutionalized racism we’ve experienced is the same,” says Connors.

“If race relations didn’t improve with Obama, they’re unlikely to improve with Trump. However, I still believe that we can make a change, but it won’t come easy. Racism is a divide-and-conquer tactic that’s been used for centuries to benefit certain sections of society, and it’s still going on today.

“I’m on a journey to defend my people. In trying to find inspiration to do that, I often look across the pond. I wanted to look at the issues ethnic groups in America are facing. I hope the program shows that we’re all human beings. It’s about community and solidarity. Now more than ever, we need to stand together, in Ireland, the United States, and internationally.”