Trinity discussion asks "Is there still an American Dream?"

The Trinity Long Room Hub’s Behind the Headlines panel discussion will explore the "American Dream" and whether it's become a nightmare, ahead of the US election. 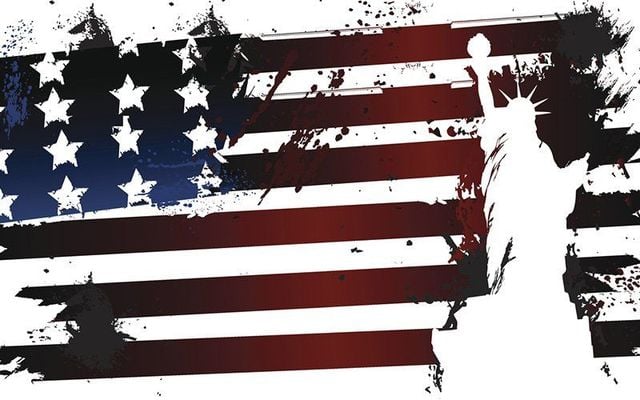 The expert panel discussion, from Trinity College Dublin, "Is there still an American Dream?" will take place on Thurs, Oct 29, 2020, at 7pm IST. Register here.

The Trinity Long Room Hub Behind the Headlines discussion "Is There Still an American Dream?" can be watched back on Facebook here.

The subject of countless songs, films, novels, and works of art, "the American Dream" has been a defining theme of the modern American ethos. As the United States election day approaches in the midst of a global pandemic, climate catastrophe, and escalating racial tensions, The Trinity Long Room Hub's Behind the Headlines discussion asks if this dream -- with its emphasis on equality, opportunity, and freedom -- has become a nightmare.

With the US now ranking as one of the most unequal G7 countries in the world, Trinity's panel of experts will explore this topic from a range of social and cultural perspectives, and in anticipation of a crucial and complicated American election day.

The Trinity Long Room Hub, Behind the Headlines online discussion will take place on Thurs, Oct 29, 2020, from 7 - 8.30pm IST. Register for the event here. The event will also be live-streamed on IrishCentral's Facebook page. 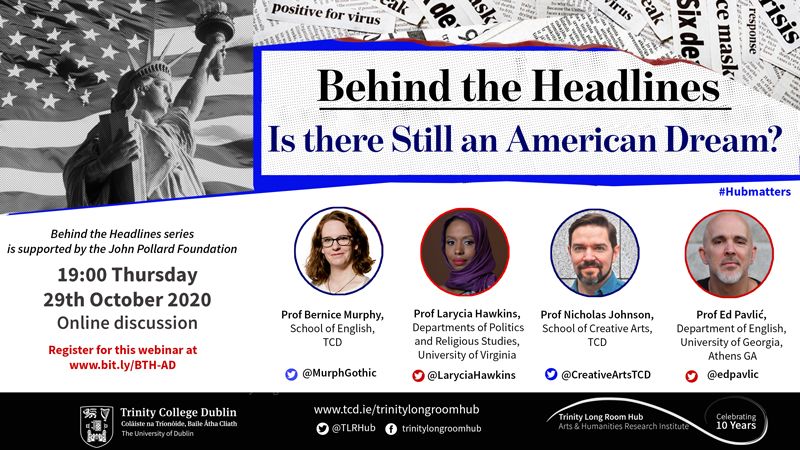 Behind the Headlines, Is there still an American Dream? speakers:

- Bernice Murphy is Associate Professor at the School of English, Trinity College Dublin, where she lectures in popular literature and specializes in the study of place and space in American horror and gothic narratives. Her books include The Rural Gothic in American Popular Culture (2013).

- Larycia Hawkins is a scholar, professor of political science, and activist. Professor Hawkins teaches and researches at the University of Virginia (UVA), where she is jointly appointed in the departments of Politics and Religious Studies. She is part of the UVA Democracy Initiative’s Religion, Race & Democracy Lab. Her publications include Jesus and Justice: The Moral Framing of the Black Agenda (2015).

- Nicholas Johnson is an Associate Professor in Drama in Trinity’s School of Creative Arts. He is a founding co-director of the Beckett Summer School at TCD and a co-founder of the new Trinity Centre for Beckett Studies. He publishes across several fields and has been a regular media commentator on the US election landscape.

- Ed Pavlić is Distinguished Research Professor of English and African American Studies and affiliated faculty in Creative Writing at the University of Georgia, Athens (GA). He is the author of 'Who Can Afford to Improvise?': James Baldwin and Black Music, the Lyric and the Listeners (2015).

The Trinity Long Room Hub’s Behind the Headlines

The Trinity Long Room Hub’s ‘Behind the Headlines’ discussion series offers background analyses on current issues by experts drawing on the long-term perspectives of Arts and Humanities research. It aims to provide a forum that deepens understanding, combats simplification, and creates space for informed and respectful public discourse.

Register for this Behind the Headlines event here. You can also watch live on IrishCentral's Facebook page.