Fontaines D.C. will be performing live from Ireland on Tuesday, July 14 as part of the 'Courage' series from Other Voices - tune in here! 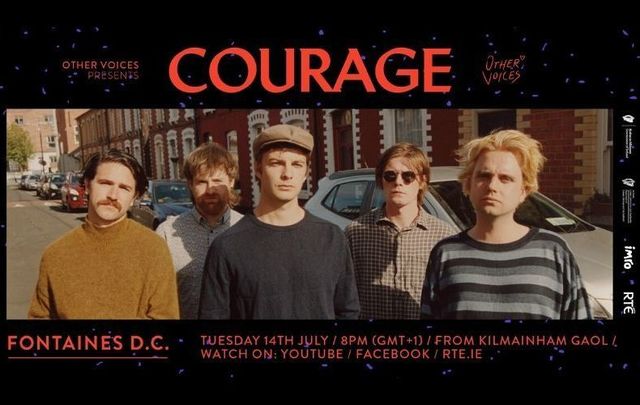 Fontaines D.C. will be performing live from Ireland on Tuesday, July 14 as part of the 'Courage' series from Other Voices - tune in here! Other Voices

Fontaines D.C. is the next Irish act featured in the 'Courage' series from Other Voices.

Fontaines D.C., the revered Irish five-piece alt-rock group, performed live from the historic Kilmainham Gaol in Dublin on Tuesday, July 14 as part of the 'Courage' series from Other Voice.

The concert was streamed here on IrishCentral and over on our Facebook page - watch it back here:

Fontaines D.C. is one of the most lauded alternative rock bands to emerge from Ireland in recent years. They released their critically acclaimed debut album Dogrel in 2019 which went on to be nominated for the Mercury Prize and the Choice Music Prize. They toured extensively worldwide last year selling out shows in iconic venues such as the Brixton Academy and playing renowned festivals such as Glastonbury Festival. They also performed on the hugely popular American talk show, the Jimmy Fallon Show. Their follow-up to Dogrel, A Hero’s Death will be released on July 31st.

Fontaines D.C. have a way with mission statements. “I don't belong to anyone/ I don't want to belong to anyone,” frontman Grian Chatten drawls in the chorus of “I Don't Belong,” the opening track of the band's new album A Hero's Death, sounding like someone riddled with angst yet resolved to protect their own freedom at all costs. If not a retreat, it almost sounds like a defensive rebuke of “Big” — Fontaines' last album opener, the one that rushed out the gates hungry to consume the whole world while proclaiming “My childhood was small/ But I'm gonna be big!”

The fact that Fontaines D.C.'s new album A Hero's Death begins with “I Don't Belong” is hard to take as anything but a pointed inversion, the music moodier and the lyrics more searching. Though the tone is noticeably different, the introduction is no less intentional: This is not the same Fontaines D.C.

Last year, Fontaines D.C. released their debut album Dogrel to widespread acclaim, garnering a legion of fans worldwide along the way. They toured behind it relentlessly. In another time, this would be nothing but a success story: A young band delivering on the hype rather than being swallowed by it. They should have been riding high; it should have been nothing but a triumphant year. But to hear the band speak of it, the whirlwind experience almost destroyed them. Suddenly on the road constantly, the band's members — Chatten, guitarists Carlos O'Connell and Conor Curley, bassist Conor Deegan III, and drummer Tom Coll — found themselves growing not only distant from one another, but distant from themselves.

“We experienced full journeys where we didn't speak to each other,” Chatten remembers. “It wasn't because we didn't love each other anymore. Our souls were kicking back against walls that were closing in. We had no space for ourselves. Our souls had nowhere to live, nowhere to lie.”

Soon, Fontaines D.C. reluctantly had to cancel planned shows, finding refuge in writing sessions back home in Dublin and rediscovering what it was that made them want to be a band in the first place. Now barely a year after Dogrel, they're back with a sophomore album with the loaded (and/or cheeky) title of A Hero's Death. It's an album that builds on what came before at the same time that it seeks to burn down a certain idea of Fontaines D.C. Arising from claustrophobic situations, they have returned with an album that expands outward, an evolution necessary for survival.