TUNE IN: Mass marking 70th anniversary of filming of The Quiet Man, tomorrow!

The Quiet Man Museum will stream a Mass dedicated to those involved in the making of the Maureen O'Hara, John Wayne classic. 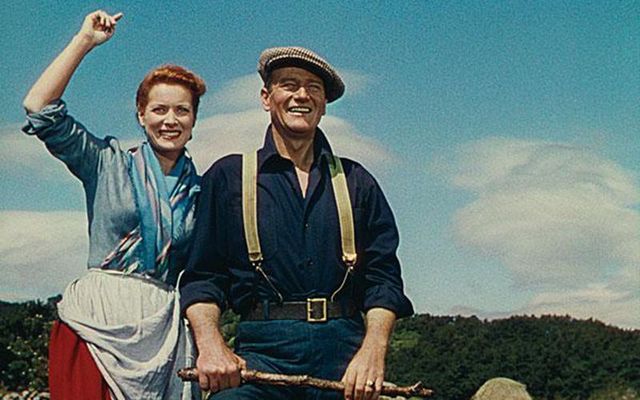 The Quiet Man: Maureen O'Hara and John Wayne in the 1952 movie, filmed in Cong, County Mayo.

June 2021 marks the 70th anniversary of the filming of John Ford's classic movie, starring John Wayne and Maureen O'Hara. Filmed in Cong, County Mayo, in the early 1950s the movie is still loved today across the world.

This June 1, at 7 pm Irish time, a Mass will be said honoring the anniversary of The Quiet Man, a movie that has meant so much to this Mayo village's community over the decades. The Mass will be live-streamed direct from The Quiet Man Museum in Cong, County Mayo.

The team from the Quiet Man Museum released a statement explaining that they had planned to hold a festival to mark the 70th anniversary but due to ongoing Covid-19 restrictions this will not be possible.

"Instead to mark the occasion Mass will be offered in Cong Church on Tuesday, 1 June at 7pm for the deceased cast, crew, and people of the parish who were involved in the making of The Quiet Man," they explained.

"Due to Covid-19 restrictions, a maximum of 50 people can attend the mass, but it will also be live-streamed on The Quiet Man Museum Facebook page."

The Quiet Man was released in 1952. The American romantic comedy-drama film was directed by John Ford and starred John Wayne, Maureen O'Hara, Barry Fitzgerald, Ward Bond, and Victor McLaglen. The film is notable for Winton Hoch's lush photography of the Irish countryside and a long, climactic, semi-comic fistfight.

It was an official selection of the 1952 Venice Film Festival. John Ford won the Academy Award for Best Director, his fourth, and Winton Hoch won for Best Cinematography. In 2013, the film was selected for preservation in the United States National Film Registry by the Library of Congress as being "culturally, historically, or aesthetically significant".