John Wayne and Maureen O'Hara discussed one of their more memorable scenes from "The Quiet Man". 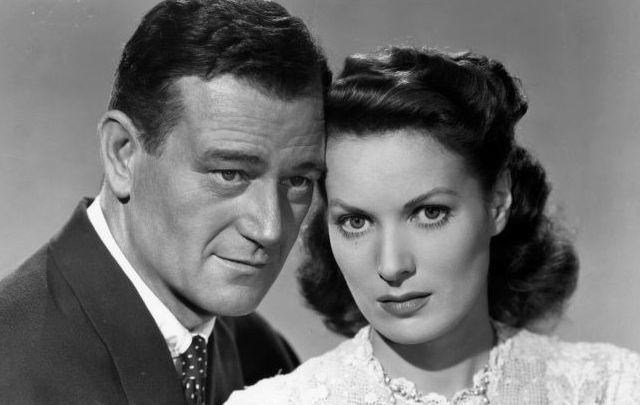 John Wayne and Maureen O'Hara famously starred together in the beloved film 'The Quiet Man'. Getty

John Wayne and Maureen O'Hara, stars of the iconic Irish film "The Quiet Man", discussed one of their more unusual stories from the famous film in a rare TV interview from 1971.

Wayne and O'Hara were speaking at the opening of the John Wayne Theater at Knott's Farm, California, and discussed their on-screen relationship in several feature films.

The pair's chemistry was plain to see in the four-minute interview and O'Hara described herself as Wayne's "fighting partner" in feature films rather than his wife.

Wayne said that there were never any "love scenes" between the two in their feature films and that his character invariably did things like "dragging her through sheep stuff in Ireland."

Wayne said that O'Hara remained "beautiful" no matter what his characters did to her.

"There's no way to make her not beautiful, we've tried that," Wayne says in the clip. "Jack Ford tried to make her unattractive in a couple of scenes and it was impossible."

O'Hara regaled the interviewer with a story from "The Quiet Man" when John Ford ordered her to be dragged through a field of sheep manure on her stomach by John Wayne. She said that a few loyal crew members kicked the manure out of the way before the scene took place but that John Wayne and Director John Ford put it right back.

"Of course, they won and I was dragged on my stomach right through this delicious stuff," O'Hara said.

She said that John Ford additionally forbid her from using a towel or water after the scene, leaving her in "that mess all day long".

The short footage typifies the relationship between Wayne and O'Hara and is well worth the watch.