Dream of owning a piece of Irish history? Check out this Georgian rectory in Mayo

This 19th century period home has links to Ireland's War of Independence and retains all the charm of its fascinating history. 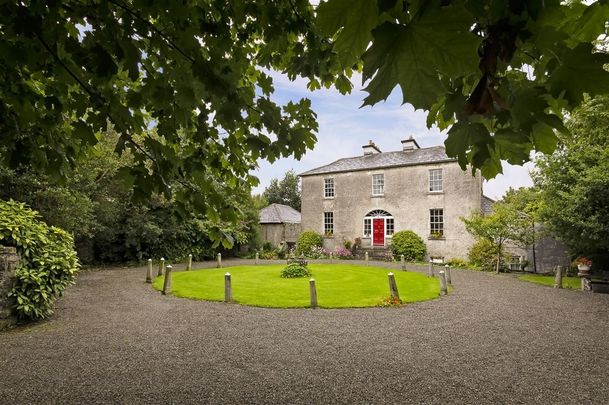 On the market for £722.2k this Ballinrobe, County Mayo home is filled with history, surprises, and style.

Known as "The Rectory", this grand Georgian home is positioned just on the main street in Ballinrobe, County Mayo. Originally a Rectory Residence for the Church of Ireland the house was occupied by Republican troops in the early 1920s, as Ireland established its independence,

Seated on  0.62 hectares (1.53 acres) of land, this residence was built as a Rectory Residence for the Church of Ireland. Its first resident was Reverend Crombie in about 1813, followed by Reverend James Anderson who resided here from 1825 to 1863. Following this, there were a number of Rectors for relatively short periods, until a Reverend Traynor took up residence in about 1880. He remained until 1925 and his tenure is the subject of many stories worth telling, according to the house's agents Tuohy O'Toole, in Westport.

The house was also under occupation by the Republican troops in the early 1920s as Ireland established its independence, while the Rector and his family remained and carried on with their normal lives.

In the 1950s the house was acquired by its current owners. Until recently it was the homes for two generations of the family.

The period Georgian home is surrounded by a walled garden, including a circular in-out driveway. The property also includes some out-offices. 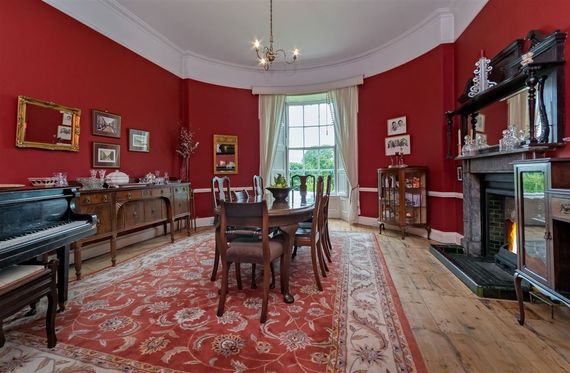 The dining room at The Rectory, in Ballinrobe, County Mayo.

The grand staircase leads to a very large gallery landing area including a large arched window, which stretches between the two floors. Upstairs you'll find four large bedrooms, a cloakroom, WC and a full bathroom. 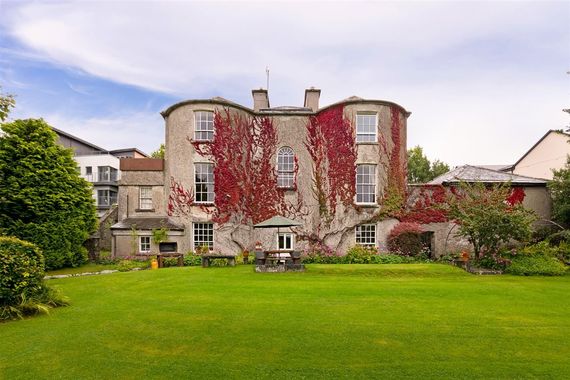 Out the back of The Rectory, in Ballinrobe, County Mayo.

At "the garden level" you'll find accommodation completely independent of the main house, this includes another large reception room, kitchen/dining area, a large en-suite, another medium-sized bedroom, a separate bathroom, further storage, another WC and a utility area.

At the back of the house, you'll find a large lawn area along with a terraced garden with steps down to Bower war and Robe River. The garden includes fruit trees while the boundaries are planted with a mix of oak, ash, sycamore, and chestnut trees.  To the side of the house, there are out-offices and stables with separate access also.

And just where in the world is this Georgian rectory house? Right in the middle of Ballinrobe town (pop. 3,770 according to the 2016 census), this house is 30 km away from Knock Airport. It's also just 54 km from Galway city and 48km from Dublin.

Now! The question stands, Is this your dream home? A bit of history in an Irish town with access to everything in Ireland you could possibly want? You tell us, in the comments section below.

Check out the full listing on MyHome.ie.