Dream of retiring to your own Irish castle? Now could be your chance, as Knockdrin Castle in Co Westmeath is on the market. 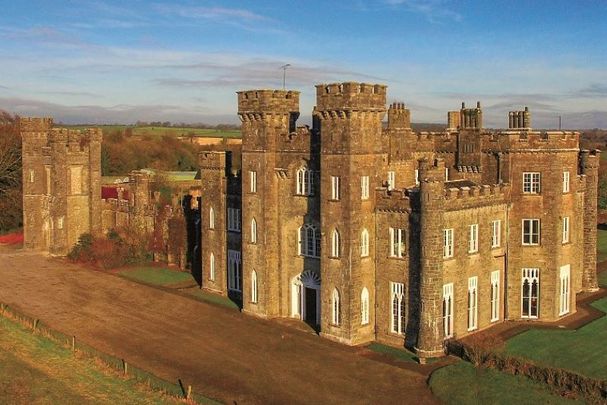 Knockdrin Castle in Co Westmeath is now on the market. Sotheby's International Realty

Knockdrin Castle in Mullingar, Co Westmeath is on the market for €5,000,000

Ever dream of owning your own Irish castle? Now could be your chance, as the stunning and historic Knockdrin Castle is on the market in Co Westmeath.

According to estate agents Sotheby’s International Realty, the sale of Knockdrin Castle represents “an excellent opportunity to acquire one of Ireland’s premier and sizable castle estates.”

Sotheby’s says Knockdrin Castle is a “splendid eighteenth-century Gothic Revival Castle majestically positioned within a rolling parkland estate of some 500 acres [202 hectares]” and quotes the property in excess of €5 million ($5.58 million) 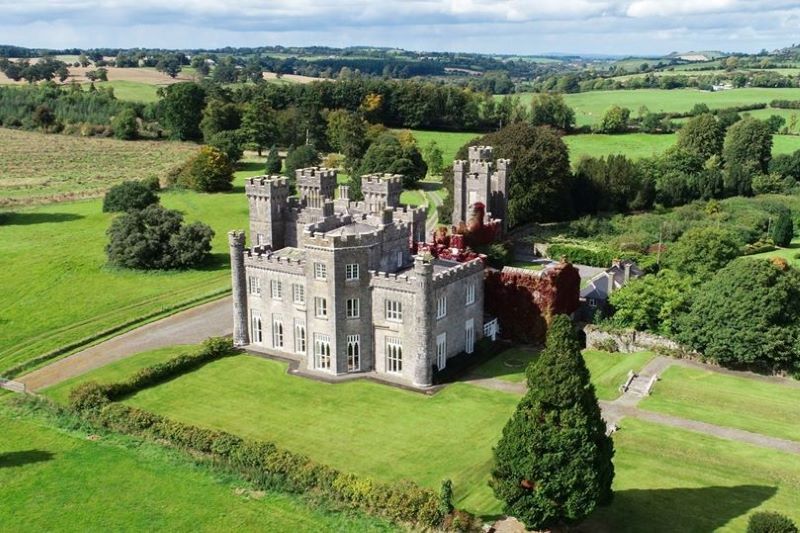 Knockdrin Castle in Co Westmeath is now on the market.

“Knockdrin Castle is one of the finest picturesque castellated country houses built in Ireland during the first half of the 19th Century. The castle was built by Sir Richard Levinge [1785-1848], who commissioned building the Gothic Revival style castle residence circa 1810. Within the gardens there is also the remains of a Medieval 16th Century, thought to date to circa 1550.

“A most striking feature at Knockdrin is the top-lit staircase made of carved oak, like the doors throughout the castle. An abundance of natural light provided by a central glazed dome. 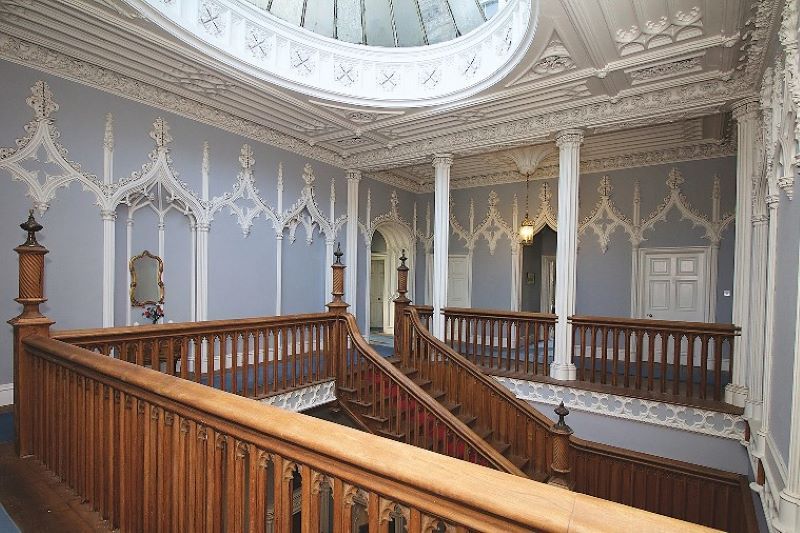 “The elaborate first-floor gallery is decorated with fluted shafts and a sequence of ogee-headed niches around the walls. Reception rooms on the ground floor include a reception hall, drawing room, dining room, ballroom, and library. 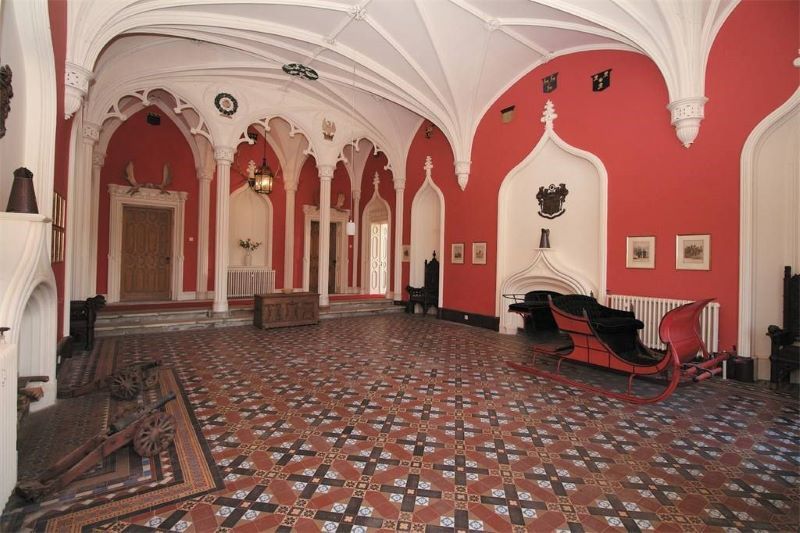 “The accommodation within the castle extends to some 19,375 square feet and provides 7 principal bedrooms [12 in total], including the Crown Bedroom where British Prime Minister Sir Winston Churchill stayed during the War of Independence [his parents being regular hunting visitors to the estate]. 4 estate lodges complete the accommodation.

“In the Irish War of Independence [1917 to 1921] the rail line between Mullingar and Dublin was bombed and was out of commission. It is locally alleged that Winston Churchill, who was staying at Knockdrin Castle, turned up at the local station demanding to go to Dublin. A local policeman is said to have told him this was not possible, to which Churchill replied ‘I don’t think you realise who I am’. To which the policeman is said to of wittily replied ‘Even if you were the Station Masters son we could not get you on a train to Dublin.’ 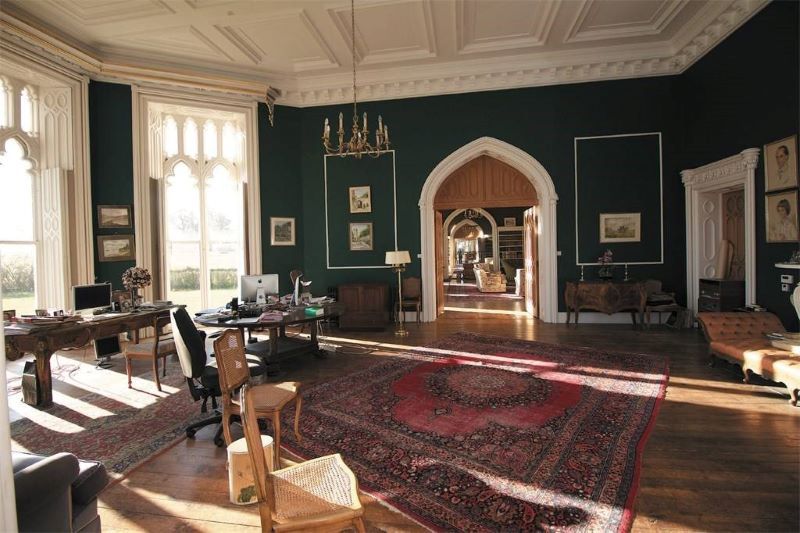 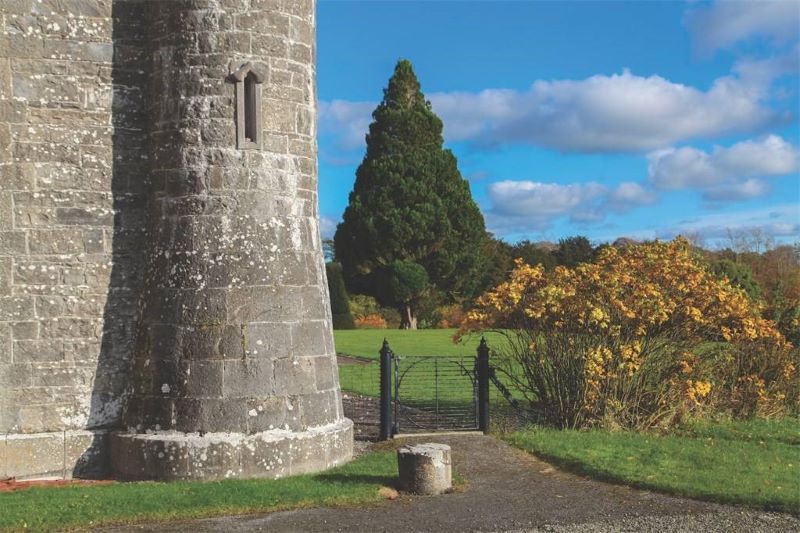 Read More: Irish castle dating from 1450 and restored to its former glory is now for sale

“The picturesque is also celebrated beyond the castle with an attractive undulating topography throughout the estate, which includes belts of highly productive arable lands along with commercial woodland and a large lake [Lough Drin], where the footprint of a lakeside Tea House is still visible.

The castle is thought to be the first house in Ireland to have both central heating [a hot air-based system] and electricity. Benefitting from major upgrading some 50 years ago and well maintained since Knockdrin Castle is structurally in good repair but, given the passage of time, requires upgrading.”

Knockdrin, while picturesque and unspoilt, is only about an hour's drive from Dublin City Centre and Dublin Airport. The M4 motorway is easily accessible, and the large town of Mullingar is about a 10-minute drive away. The smaller towns of Castlepollard and Cloughan are about a 15 and 8-minute drive away respectively. The village of Crookedwood is 2.2 miles (3.6 km) away. Adjacent to the estate is a petrol station which has a small grocery and newsagents shop.

You can get a better look at Knockdrin Castle here:

Read More: This castle in Co Kildare could be yours for less than $500k