Áine Duffy, a musician, singer, songwriter, and performer, built the small moveable home after a tree fell on her parent's land outside the Cork town of Bandon. 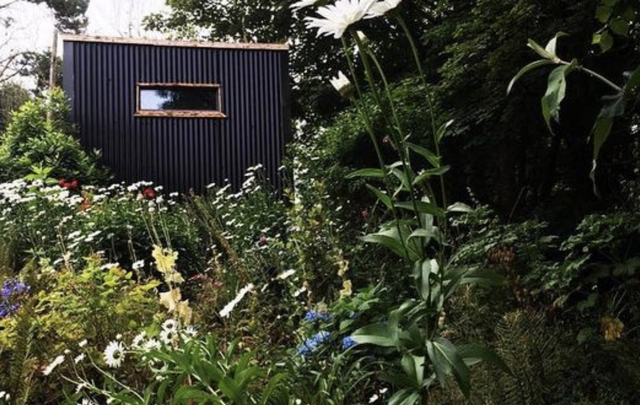 A Cork musician has responded to Ireland's housing crisis by building herself a tiny one-roomed house in the Irish countryside for just over $14,000.

Áine Duffy, a musician, singer, songwriter, and performer, built the small moveable home after a tree fell on her parent's land outside the Cork town of Bandon.

Duffy, who loves building things, told the Irish Times that she realized that she didn't have the financial resources to buy a conventional home and turned to her creative abilities to build a cozy and functional house for herself.

"Like so many others in a similar predicament, the housing crisis had started to really affect me," she told the Irish Times.

She said that she briefly stayed with friends but sought to find a long-term solution as she is independent and unafraid of hard work.

"I decided to take things into my own hands. So when a tree fell on my parent’s land, I asked if they would mind if I built a small moveable home there. I said it would be secluded and beautiful and they said to go for it," she told the Irish Times.

She said that she borrowed €12,000 from her local Credit Union and bought suitable windows from the Munster Joinery factory before using the window measurements as a guide to draw up plans for the small house on her iPad.

Duffy then sought advice from an expert on tiny homes and set about building her new home.

The expert brought in a crew to build a steel frame base, a frame for the house, and a fiberglass roof, while Duffy and her parents set about digging the house's foundations.

"I then got on with cladding the outside, with both timber and black corrugated iron sheets, working throughout the winter, while either my friend or my mum held the ladder," she said.

However, Duffy said that she was "on her own" for most of the building due to coronavirus restrictions.

The musician's house is insulated by two different insulation types and wrapped in an air-tight membrane. She has wired the property and installed underfloor heating, while a professional electrician will visit the house to connect it to the power grid and make sure that everything is in order.

In the meantime, Duffy has run cables from her parents' house, allowing her to move in.

She said that the roof was one of the most difficult parts to create because it was so expensive, but she came up with an innovative solution.

Duffy took some hessian coffee bags from a friend who works as a coffee roaster and laid them across the fiberglass roof before adding gravel, sand, and compost on top.

She also installed a composting toilet outside the house complete with a shelter and some leaves to add privacy.

Inside, Duffy installed a vaulted bed, bathtub, wardrobe, and kitchen, which were all designed to meet the needs of the small property.

Her friends also donated a fridge, cooker top, and worktop that they didn't need to help her turn the property into a home.

All told, it took Duffy just over six months to build the small property, which measures 11 ft high, and 16 ft by 10 ft wide.

The house is surrounded by trees and fields and is designed to capture natural light.

Duffy told the Irish Times that building her own home has eased her worries about getting a mortgage and allowed her to relax.

"My new house is great – it’s easier to clean and to keep warm and I definitely don’t lose things as often. The stress of worrying about a mortgage and fighting for housing has been lifted, and what a weight that is. Also, it’s nice to have a green roof and passive home and feel like I’m doing my bit for the environment."