Derry beat Donegal on Sunday to become the Ulster GAA Senior Football Champions for the first time in more than two decades. 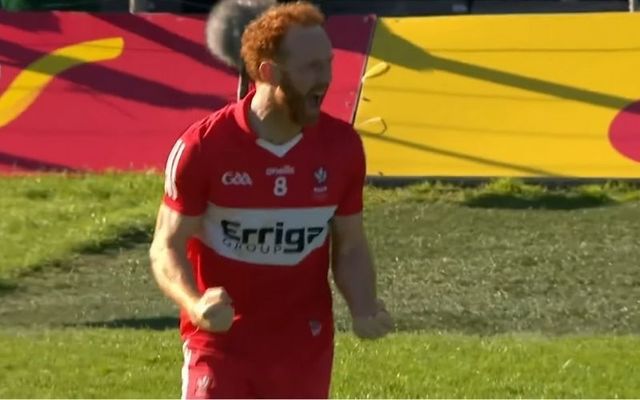 Derry are Ulster football champions for the first time in 24 years, and not even the great Michael Murphy could save Donegal with the final kick of Sunday’s epic 1-16 to 1-14 win after extra time in Clones.

Late points from Shane McGuigan, Brendan Rogers, and Conor Glass sent Derry two clear when Murphy was appointed to take the last gasp free when only a goal could save his side. He missed the back of the net and Derry were champions.

The Oak Leaf had led by five points in the first half thanks to Niall Loughlin’s goal, then conceded an Odhran McFadden Ferry goal early in the second period as the game ebbed and flowed all afternoon before two late pointed frees from McGuigan forced extra-time.

That’s when this resurgent Derry side made their mark and Rory Gallagher had his day against the side he coached and managed in their glory-filled recent past. Now though his sights are on more glory with this rising Derry team.

Speaking to the media afterward, Gallagher declared, “I’m delighted. It was probably an epic way to win an Ulster championship and probably quite fitting. The drama, considering we were played Tyrone, Monaghan, and Donegal who have owned us at championship, with the exception of Cavan, for the last 24 years maybe.

“And for these players who are bound to have watched on with huge envy and jealousy and have looked on for the last six or seven years that they not be part of it. So to win it the way we did: they showed character. (Not) a perfect display. But they had character.

“We felt we were the better team so we had to reprove it again. And even the end of normal time we had the chances we came from behind after giving away a shocking goal by our standards.

“We hadn’t conceded a goal against Armagh and Donegal last year and Tyrone and Monaghan this year we didn’t bank on conceding one today but from the throw-in it’s in the net, to show that level of character or balls or whatever you want to call it I never doubted we’d come back but that doesn’t mean I thought we’d win. You just don’t know.”

"Rogers! Glass! They have shown their class" 👌

The final score of Sunday's Ulster final after over ninety minutes of battle in the Clones sun. 🇦🇹pic.twitter.com/EghMBBrY95

Donegal will live to fight another day in the qualifiers after this narrow, narrow defeat.

“It was a war of attrition, the goals were big scores in the game, and when Derry got theirs in the first half that was big,” said their boss Declan Bonner.

“We were down five at one stage but lads really got stuck in and at the start of the second half the goal was important to us. When we were two ahead I thought we could have kicked on, but we didn’t kick as well as we normally would have and again it’s the small margins.

“You’ve got to take those scores and we didn’t take them, Derry ultimately came out on top. Being beaten in an Ulster final is difficult. We knew it was going to go down to the wire and ultimately it did. Derry got their scores in extra time to put them over the line and fair play to them to come through a difficult route. We have to dust ourselves down and look at what’s ahead of us in the qualifiers.

“That’s just the way it is. We have to move on. It’s not easy but we have to get back on the horse by the end of the week.”